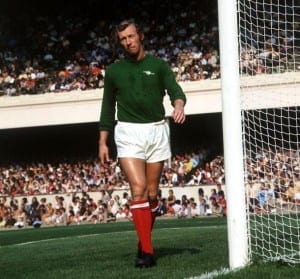 An assured stopper and Arsenal's number one throughout the late sixties and early seventies, Bob Wilson dedicated almost four decades of his life to the North London club.

Like many budding players, Wilson's early career was stymied by the conception that football was not a realistic vocation. The young goalkeeper was dissuaded from signing terms at Manchester United by his father, opting instead to train as a teacher at Loughborough College.

After spending two years at Wolverhampton Wanderers, Arsenal came calling, offering over £6,000 for his services – the first ever transfer fee paid for an amateur player. He made his debut whilst still an amateur, tending net against Nottingham Forest in October 1963.

Although Wilson would sign professional terms the following year, he made just ten appearances in his first four years at Highbury, spending time in the reserves whilst completing his teacher training.

In that time, Arsenal struggled in both league and cup competitions, but the promotion of Bertie Mee to manager coincided with an upturn in fortunes – and ultimately gave Wilson a chance to shine in the first team.

Jim Furnell had been Arsenal's first-choice custodian for a number of years, but a mistake in an FA Cup tie against Birmingham City proved costly. Wilson was handed the gloves for the replay, and was entrusted with the number one jersey on a permanent basis thereafter, featuring in every game the following season.

A fine shot stopper, his goalkeeping style was nevertheless defined by his bravery, often throwing himself at attackers' feet with little regard for his own wellbeing. Throughout his career, Wilson suffered a torn ear, a punctured lung, a number of shattered ribs and a broken arm, with the latter keeping him out of action for much of the 1969/70 campaign. 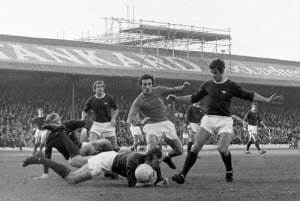 Bob Wilson throws himself at a Blackpool attacker's feet in customary fashion. (Image via Mirrorpix)

He won his first silverware with Arsenal that year, helping the Gunners turn around a two-goal deficit to defeat Anderlecht in the Inter-Cities Fairs Cup, but greater glory would follow closer to home.

In 1970/71, Arsenal saw off Leeds United by a solitary point to clinch their first championship in almost twenty years. Tellingly, only Liverpool conceded fewer league goals that season.

The Reds were the Gunners' opposition in the FA Cup final that May. Wilson was in fine form, expertly denying Alec Lindsay and pulling off a number of key stops against Heighway, Thompson and Toshack as Arsenal triumphed 2-1 in extra time to clinch a famous Double.

Wilson was ever-present between the sticks throughout the league and cup campaigns, and was named Arsenal's Player of the Year for his contribution to the club's success – a rare feat for a goalkeeper, and an honour befitting of his importance in the side.

Wilson continued to serve as number one at Highbury for the next three seasons – also representing his parents' birth nation Scotland on two occasions in 1971 – before retiring unexpectedly at the relatively young age of 32.

His association with Arsenal would endure well beyond his playing career. Wilson spent almost three decades as the club's goalkeeping coach, helping Pat Jennings prolong his career at Highbury, as well as developing the likes of John Lukic and David Seaman.

He enjoyed a similarly distinguished career as a sports broadcaster on both the BBC and ITV, but 'Willow' will predominantly be remembered as the Gunners' bold and intelligent custodian during one of their greatest successes.