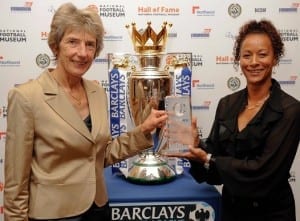 A technically gifted midfielder, Brenda Sempare was one of the finest players of her generation, and enjoyed a decorated domestic and international career.

Internationally, she played a starring role in England's 1985 Mundialito ('Little World Cup') triumph, netting a crucial goal in the 3-2 victory over Italy in the final. Three years later, she helped England reach the semi-final of the 1987 European Competition for Women’s Football, whilst also working as a postwoman. She played in all four games of the 1995 World Cup in Sweden, which included victories against Canada and Nigeria.

"SHE WAS THE MOST NATURALLY GIFTED PLAYER I'VE EVER PLAYED WITH. TECHNICALLY SUPERB. THERE HAS NOT BEEN A PLAYER THAT I HAVE SEEN IN THE LAST 10 YEARS WHO COULD MATCH HER SKILL." MAL SEARLE

The midfielder impressed for club as well as country. Sempare’s performance for the Friends of Fulham in the 1985 FA Cup Final has been described by Hope Powell as "the best all-round performance I have ever seen".

Her goal in May 1996 against Arsenal Ladies helped win Croydon the League; the side were unbeaten throughout the season. Sempare went on to play in the FA Cup Final against Liverpool that year. She netted in the penalty shootout, beating fellow Hall of Fame alumni Rachel Brown-Finnis from twelve yards, to help secure a famous Double for the club.

Brenda was later described by Powell as "outrageously skilled...for me, she was one of the best players ever to pull on an England shirt".