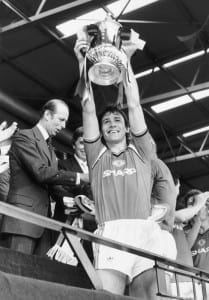 Bryan Robson, Manchester United's captain, shows off the FA cup to the Wembley crowd after victory over Everton at Wembley stadium. Pic courtesy of Mirrorpix.

County Durham-born midfielder Bryan Robson was the lynch pin of the Manchester United side transformed under Alex Ferguson in the late 80s and early 90s, and was a driving force for England, playing 90 times for his country between 1980 - 91, despite a number of injury problems.

Robson made his senior debut for West Browmich Albion, with whom he had been an apprentice, in 1975. A versatile, whole-hearted player, he impressed in central midfield under Ron Atkinson, and followed his manager to Manchester United in 1981 for a record British transfer fee of £1.5million.

By this time he was establishing himself in the England national side. As a fiercely competitive defensive midfielder Robson brought fantastic ball-winning skills to any side he played in. However he stood out as his ability in the opposition half developed: a fantastic reader of the game, his vision and pace meant he could score and create goals as well.

His manager namesake Bobby Robson viewed him as England's best player, and in all he would captain the national side on 65 of his 90 appearances.

"A miracle of commitment, a human marvel who pushed himself through every imaginable limit"  Sir Alex Ferguson 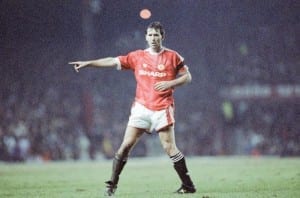 For his club, Robson bridged the eras of two different managers. He captained Ron Atkinson's United to FA Cup victory in 1983 and 1985, and became the first club captain to lift the famous trophy a third time under Alex Ferguson in 1990.

By the start of the 90s, injuries sustained over 15 years of hard competition (and the emergence of younger players like Paul Ince and Roy Keane) were limiting Robson's first team opportunities. However the hugely dedicated club captain was still on hand to lift the first Premier League trophy for United in 1993, and played 15 final games to qualify for another league winner's medal the following season. In total, Robson played 461 games and scored 99 goals for United, winning 3 FA Cups, 2 league titles and a European Cup Winners' Cup.

Robson left United to take on the role of player/manager at Middlesbrough, leading the team to the Premier League (twice), two League Cup finals and an FA Cup final during his seven seasons in charge. His final playing appearance came in 1997, aged 39.