As part of our new partnership with the Football Writers' Association, nationally recognised journalists and sports writers will be putting pen to paper in honour of selected Hall of Fame inductees. Here, FWA chairman and widely respected journalist Patrick Barclay (@paddybarclay) reflects upon the career and influence of Manchester United captain and Players' Union co-founder Charlie Roberts. 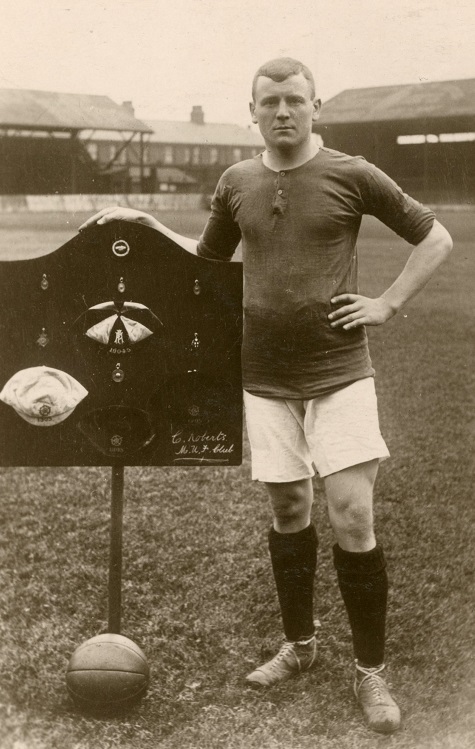 Charlie Roberts was the driving force of a great Manchester United team, the Roy Keane of the early twentieth century. He didn’t come cheap – Ernest Mangnall, the distinguished precursor to Sir Matt Busby and Sir Alex Ferguson, had to persuade the directors to pay Grimsby Town an eye-watering £600 for him – but how liberally Roberts justified that outlay.

Having arrived in 1904 at the age of 21, he became the central and most important section of a great half-back line (deep midfield in modern terms) with Dick Duckworth and Alec Bell. The team also featured the great attacker Billy Meredith and between 1908 and 1911 won two League titles and an FA Cup.

Around this time an Italian student was living in Manchester. His name was Vittorio Pozzo and he followed United avidly, becoming friendly with some of the players, especially Roberts, whom he was later to describe as the best player in the world: an opinion that gained weight when, in 1934 and 1938, Pozzo, now a manager, guided Italy to successive World Cup triumphs.

Roberts by now was close to a premature death at 56, soon after a brain operation. But he was held by many to have influenced the style of Pozzo’s Italy. A player of unusual tactical awareness who had spent many hours discussing the game with Pozzo in Manchester, he had performed a version of the third-back game even before Herbert Chapman used Tommy Wilson between his Huddersfield full-backs in the 1922 Cup final.

Roberts, though, was never a mere ‘’stopper’’ in the manner favoured by Chapman. A natural captain, he loved to be at the centre of the play and even chipped in the odd goal for United before in 1913 he was sold to Oldham Athletic for £1,500.

He might have been something of an England legend too, but a total of just three caps testified to another aspect of the single-mindedness that made him such an inspiring skipper: he was, like Meredith, one of the Players’ Union pioneers. They required a long struggle with the employers and the FA before winning recognition and, in consequence, Roberts was repeatedly overlooked for international selection.

At one stage, disheartened by players of other clubs who declined to join the union, he declared: ‘’I know of no class of working people who are less able to look after themselves than footballers.’’

Perhaps, gazing down from the heavens upon the prosperous performers of today, Roberts allows himself a wry smile. But where would the Pogbas and Lukakus be without the fighters of yesteryear?