Arsenal’s all-time top goalscorer for nearly 60 years, Cliff Bastin was a key player in the side that dominated English football in the 1930s.

Beginning his career for his home club Exeter City in 1928, Bastin was soon spotted by Arsenal manager Herbert Chapman, and made his debut for the Gunners at the age of 17 in October 1929. The young ‘Boy Bastin’ played on the left wing, regularly cutting into the penalty box to score, as Chapman's famed 'WM' formation encouraged the outside forwards to do. His scoring record of 178 goals for Arsenal (all scored before the outbreak of World War II, although Bastin was to make 7 more appearances when football resumed in 1946) lasted from 1939 until it was broken by Ian Wright in 1997, and then again by Thierry Henry in 2005.

By the age of 19, Bastin had won both the League title and FA Cup, and had won the first of his 21 England caps. In total he was to claim 5 league titles and 2 FA Cups. 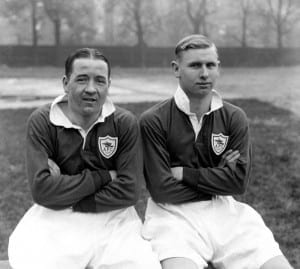 One of his final appearances for England came in 1938, when England played Germany in a friendly in Berlin. The match was seen as a powerful piece of propaganda for the ruling Nazi party, with the English side obliged to offer a 'Nazi salute' before the game. Bastin, with Stanley Matthews, was England's biggest star player for the match, and was even put on the cover of the programme by the match organisers. He went on to score the first and assist the second goals as England ran out 6-3 winners. He was to score in each of his final 5 games for England, and was still only 26 when he won his final cap later that year. Bastin missed much of the 1938/39 season due to injury, before the outbreak of effectively war ended his professional career at its peak. 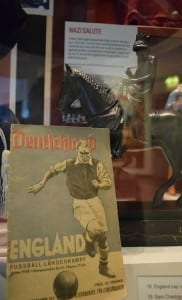 Germany vs England programme, 1938, on display at the National Football Museum

A stand is named after him, as the club’s most famous footballing son, at Exeter City’s St James Park stadium. Bastin was inducted to the National Football Museum Hall of Fame in 2009.