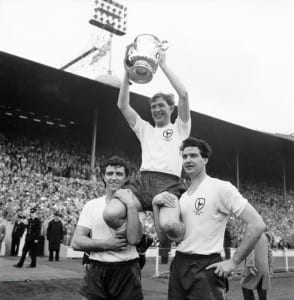 Danny Blanchflower once said: “The great fallacy is that the game is first and last about winning. It’s nothing of the kind. The game is about glory. It is about doing things in style, with a flourish, about going out and beating the other lot, not waiting for them to die of boredom.”

Initially Blanchflower played for Irish side Glentoran. He began his career in England at Barnsley in 1949, soon finding himself at odds with the management. In 1951, he moved to Aston Villa, where his elegant style was somewhat out of place with Villa's physical approach. He made 155 appearances for the club before making his career-defining move to ‘Spurs. Blanchflower was captain of the ‘Spurs 1961 ‘double’ winning side, a feat not achieved since Aston Villa in 1897. Adding to his achievements in 1962, he helped Tottenham to win the FA Cup against Burnley, a game in which he scored a penalty. In 1958 and 1961 his performances were recognised as he received the accolade of Footballer of The Year, one of few players to receive the award twice. In 1963 he helped ‘Spurs to win the European Cup Winners' Cup – the first European victory by an English club. 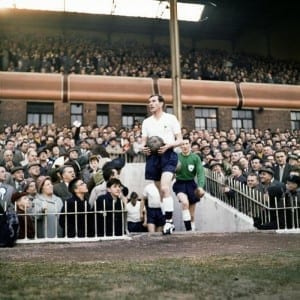 The intellectual Ulsterman played 56 times for Northern Ireland, captaining the unfancied team to the World Cup quarter-finals in 1958. Blanchflower’s younger brother Jackie was also set feature in the campaign, until the Munich Air Disaster cut short his playing career earlier in the year. A combination of injury and age (38) forced Danny’s retirement in 1964.

Blanchflower was known for his exquisite vision and movement in the midfield playmaking role. He had an ability to dictate and change a game at an instant, linking up with the likes of Jimmy Greaves, Cliff Jones and Bobby Smith. He brought guile and vision to any team he played for. Much of Blanchflower’s continuing allure is because he was a thinker as well a player – though much of what he said would have landed him much more trouble in today’s game! He gained notoriety as the first man to refuse Eamonn Andrews’ invitation to go on This Is Your Life. As a result the show was never again filmed live… Blanchflower made a mark wherever he went.