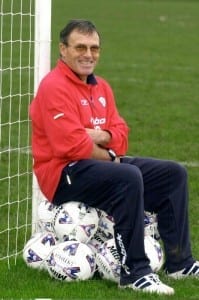 Dario Gradi is revered as one of English football’s best developers of young players.  In over thirty years at Crewe Alexandra, he has played a key role in coaching the likes of David Platt, Geoff Thomas and Danny Murphy to achieve England international caps.

Born in Milan, Gradi moved to London after the Second World War and played non-league football before beginning a coaching career with Wimbledon.  In 1978 he oversaw promotion to the Third Division.

After a short spell at Crystal Palace, Gradi accepted an offer to join Crewe Alexandra in June 1983, where he has been ever since!  Gradi joined a club who regularly finished near the bottom of the fourth division and (pre-relegation to non-league) had to apply for re-election.

A few seasons of steady progress led to a first promotion out of the Fourth Division in 1988/89.  During the 1990s, Crewe were often battling at the top of the Third Division in an attempt to be promoted to the second tier for the first time in the club’s history.

This was finally achieved in a Play-off final win at Wembley in 1997.  The following season, 1997-98, saw Crewe finish 11th in the old First Division, which remains the club’s highest ever league placing. 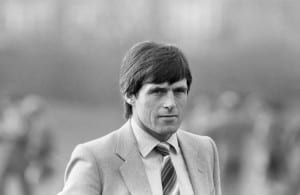 Relegation from the First Division and an immediate return in 2003 followed, before Gradi finally stood down as first team manager in April 2007.  He had been in charge for almost 24 years (though he has been in caretaker charge on a number of occasions since).  Gradi is now in charge of the club’s renowned academy and remains a board member.

Gradi was awarded an MBE in 1998, the PFA Merit Award in 2004 and the Football League’s ‘Outstanding Contribution to League Football’ award in 2011.

Other players to have progressed through the club’s academy and gone on to play in the top-flight and often international football include; Rob Jones (Liverpool & England), Seth Johnson (Leeds United & England) and Dean Ashton (West Ham United & England).

Gradi was inducted to the National Football Museum Hall Of Fame in 2004, at the time he was the longest-serving manager in English football. Only Sir Alex Ferguson's 26 year reign at Manchester United would ultimately be longer than Gradi's uninterrupted spell in charge.