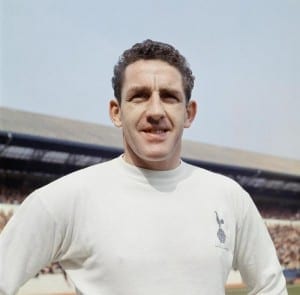 Tottenham Hotspur were convinced to pay Heart of Midlothian £32,000 for the services of combative wing-half warrior Dave MacKay after a skilled performance for Scotland in the 1958 World Cup Finals. A Hearts fan since childhood, Mackay had already won the league and cups with the Edinburgh side, and was captain of the team that won the Scottish League title with an incredible +103 goal difference in 1958.

His impact at Spurs was immediate, with manager Bill Nicholson bringing Mackay in alongside the likes of winger Cliff Jones, striker Bobby Smith and captain Danny Blanchflower.

"He turned a good side into a great one" Cliff Jones

Known for his determined attitude, the defining moment of his career came in 1961 when he played a major role in Tottenham’s FA Cup and League Championship ‘double’ success, alongside his half-back partner, Danny Blanchflower. 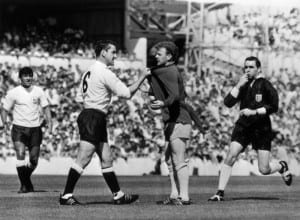 He missed Tottenham’s 1963 Cup Winners’ Cup Final triumph due to injury, having been a goalscorer in the comfortable semi-final victory, but the competition was to provide him with his greatest challenge the following season. A double leg break sustained at Old Trafford in the competition in December 1963 meant some say he would never play again; a repeat break during a reserve game 9 months later seemed to spell the end of an already great career. But Mackay's characteristic determination saw him come back to lift his third FA Cup in 1967.

Arguably the most famous picture of Mackay was taken on the first day of that 1966/67 season, with the Spurs man holding Leeds' combative midfielder Billy Bremner by the scruff of the neck. For fans it's a picture that shows an era of football where 'hardmen' were the norm, but Mackay himself claimed it made him look like a bully. Bremner had just taken a kick at the leg Mackay had broken twice in previous seasons. Both men were spoken to by the referee, but Mackay's proud record of never being sent off was maintained. 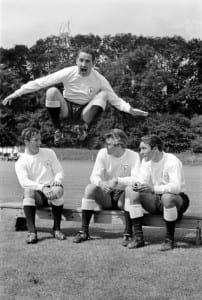 He made over 300 appearances for Tottenham in total before transferring to Brian Clough's Derby County in 1968, feeling the effect of his injuries meant he could no longer play at the highest level. He helped take his new club to the First Division the following season.