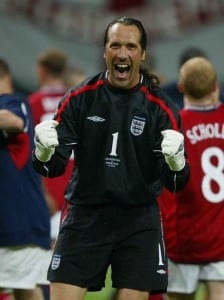 Known as ‘Safe Hands’, goalkeeper David Seaman made over 1,000 appearances in a remarkable 23 year long career. A promising youngster with Leeds United, manager Eddie Gray released him to Fourth Division Peterborough United in 1982 for a fee of just £4000. Leeds' first-choice 'keeper at the time, John Lukic, believed Seaman's agility, positioning and presence meant there was a great career ahead of him, despite the early setback.

After 2 seasons at Peterborough Seaman moved to Division Two with Birmingham City, winning promotion in his first season. An eye-catching season of top-flight performances were enough for Queens Park Rangers to pay £225,000 to keep Seaman in Division One at the start of the 1986/87 season. While he was with Rangers he made his first England appearance in 1988, when Peter Shilton was still first choice and Chris Woods was seen as the natural successor.

In 1990 Arsenal manager George Graham broke the British transfer record for a goalkeeper with a bid of £1.3 million to take him to Highbury. The keeper was to be the key part of a formidable defence. Ironically, he was brought in to replace Arsenal's established first choice John Lukic, who was to be sold back to Leeds.

In Seaman's first season as a Gunner he conceded just 18 goals in 38 games as Arsenal took the First Division title. Between 1990 and 2003 he would make 564 appearances for the Gunners, helping them to three First Division and Premier League titles, four FA Cups, one League Cup and one UEFA Cup. 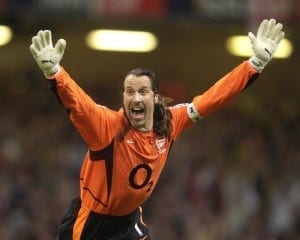 As Seaman established himself with Arsenal and England his reputation as 'safe hands' and instantly recognisable moustache and (for some years) ponytail sometimes belied his capacity for reaction saves of incredible agility. In his 1000th career game, Seaman made arguably the most famous save of his club career; stretching miraculously behind himself to scoop a near point-blank header away from the goal-line as Arsenal defended a 1-0 lead against Sheffield United in the FA Cup semi-final of 2003. He went on to captain Arsenal in the final, lifting the famous trophy on his final appearance with the club.

With England Seaman made 75 appearances over 14 years. He is England's second most-capped goalkeeper, perhaps all the more remarkable for playing during the era of Peter Shilton, Chris Woods, Nigel Martyn, Tim Flowers, David James and many other top keepers who were tipped to take over the no. 1 shirt.

Euro 96 was one of many highlights, with several crucial penalty saves taking England to the semi-finals. He went on to appear for England at the 1998 and 2002 World Cups. He was awarded an OBE in 1997. After leaving Arsenal in 2003 Seaman had a short spell with Manchester City before retiring in 2004.

Inducted to the Hall Of Fame in 2016, Seaman was presented with the award by his long-time friend, and two-time team-mate, John Lukic.

John Lukic asked to sum up @thedavidseaman: "Well he nicked my job, didn't he? The worst decision he made was that ponytail." #NFMHallOfFame pic.twitter.com/RjSYk6MNSn