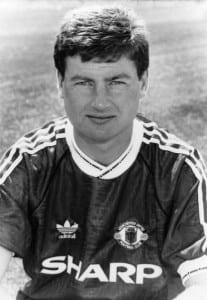 Regarded by Sir Alex Ferguson as one of his greatest ever signings, Denis Irwin was an ever-present for Manchester United during the 90s, winning all major honours in 12 years with the club.

Born in Cork, Ireland, Irwin first played in England for Leeds United in 1983, before moving to Oldham Athletic on a free transfer in 1986.

In four years with the Latics, Irwin made 167 appearances. In his final season with the club, 1989-90, he was part of the team which reached the League Cup final and was beaten by Manchester United in the FA Cup semi-final.

Irwin’s performance in that semi-final contributed to Alex Ferguson’s decision to sign him for Manchester United at a cost of £625,000.

Comfortable in both full-back positions, Irwin was a set-piece specialist, taking free-kicks and penalties for United. In total he scored 22 goals in 368 appearances for the club.

Irwin made 48 appearances in United’s 1998-99 treble winning season, when the club won the European Cup for the second time in their history. 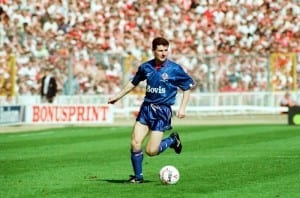 Irwin’s consistency and dependability for Manchester United is borne out by the fact that in every season bar two between 1990 and 2000, he played over 40 games.

A stalwart of the Irish national side for close to a decade, Irwin gained 56 caps and played at the 1994 World Cup finals.

Discussing his best Manchester United team in 2013, Ferguson said of Irwin that he “would be the one certainty to get in the team. I called him an eight out of 10”.

In his acceptance speech, Irwin credited his time at Oldham with manager Joe Royle for reigniting his career, and fondly remembered United's historic treble: “Playing football is a great life, I was fortunate to play with so many great players at Manchester United which made my life easier…but 1999 would take some beating.

"I think you’d have to win the World Cup to top those 10 days, winning the league, beating Newcastle in the FA Cup and beating Bayern Munich, the way we did it will take some beating."