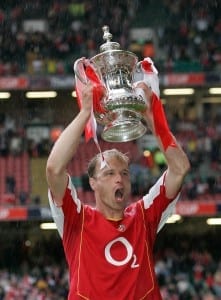 ‘Non-Flying Dutchman’ Dennis Bergkamp was manager Bruce Rioch’s first signing for Arsenal in 1995. He went on to make the number 10 shirt his own for 11 glorious years, mostly under the management of Arsene Wenger. Selected by Pele as one of FIFA’s 100 greatest living players, Bergkamp was known for his fine technique, plentiful assists and breath-taking goals.

An advocate of ‘Total Football’ the Dutchman was schooled in versatility. At his boyhood club Ajax, Dennis played every position except for goalkeeper. Throughout his time at Arsenal he proved able to form prolific partnerships: initially with Ian Wright, then as the attacking fulcrum of Wenger’s side with the likes of Anelka, Henry, Overmars and Ljungberg.  He was still a popular and influential part of the unbeaten 2003-4 ‘Invincibles’ team.

Throughout his career with Arsenal he won three Premier League titles and four FA Cup trophies. He brought the curtain down on his club career following the 2006 UEFA Champions League Final, when Bergkamp was an unused substitute for an Arsenal side defeated 2-1 by Barcelona, having played most of the game with 10 men. 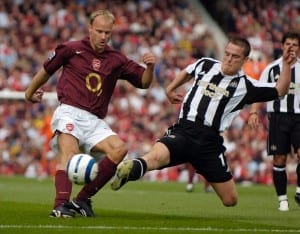 His international career was equally as prolific. Bergkamp scored 37 goals in 79 appearances for the Netherlands. One memorable moment was his final minute goal against Argentina in the 1998 World Cup Quarter Final. It was a classic Bergkamp moment in which his touch and cool demeanour transformed the outcome of the game.