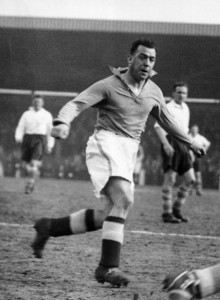 In the 1927-28 season 21 year old William Ralph ‘Dixie' Dean scored a record-breaking 60 goals for Everton in just 39 games. It's unlikely that his record will ever be broken. During the 1928 calendar year, he notched 85 goals in all appearances.

Across his career, Dean scored 473 goals in 502 appearances for club and country. He was twice leading scorer in the First Division, and on both occasions Everton were crowned champions (Dean stayed with the club when they were relegated in between these two victories in 1928 and 1932). In internationals his record was again better than a goal a game, with 18 goals in 16 appearances.

"HE BELONGS TO THE COMPANY OF THE EXTREMELY GREAT... LIKE BEETHOVEN, SHAKESPEARE AND REMBRANDT" BILL SHANKLY

With a career cut short by the physical demands of the game, and eventually by the outbreak of war, it's perhaps impossible to estimate what a player of Dean's phenomenal goalscoring ability would be worth in the modern era.

Sir Matt Busby, who played against him, said ‘When Dixie went up for the ball, he was almost unstoppable’. Liverpool manager Bill Shankly described Dean as the greatest centre forward the game had ever seen.