A pragmatic tactician and astute man manager, Don Revie built a legacy at Leeds United which still exists to this day.

In his youth, Revie led the line for Second Division outfits Leicester City and Hull City before earning a move to Manchester City in 1951, where manager Les McDowall deployed him as a deep-lying centre-forward; a first in English football. The tactic, colloquially known as the ‘Revie Plan’, yielded FA Cup success in 1956, as well as half a dozen England caps for the Boro-born forward.

Revie spent two years at Sunderland before moving to Elland Road, skippering the Whites as they successfully staved off relegation. Coming towards the end of his playing career, he considered moving into management – almost taking charge at Third Division side Bournemouth - and was offered the chance to take the reins at Leeds United in a combined player-manager role.

Although his playing contribution was limited in his final season, Don instilled a set of values and practices which would serve the club well in future years. On the field, Revie’s Leeds cultivated a reputation for ferocious tackling, physical intensity and hard running.

Off the field, the new manager was transforming the Yorkshire club from the ground up. He developed a successful youth academy, becoming a father figure to the team’s younger players, and created a sense of family and togetherness within the Elland Road ranks.

"He wasn't just a manager to me...he brought me along in life and was more like a father than a manager." Eddie Gray

His meticulous attention to detail started to reap rewards within two years, as the Whites – led by skipper Bobby Collins – won promotion back to the First Division as champions in 1964. They came desperately close to clinching remarkable back-to-back titles the following year, missing out to Manchester United on goal difference, and lost the FA Cup final to Liverpool in extra-time.

United’s luck changed for the better in 1968. Boasting a side anchored by Jack Charlton and Norman Hunter, a winning partnership of Bremner and Giles in the middle of the park, and record transfer Billy Jones up front, Leeds lifted the League Cup in March, successfully shutting out Arsenal in the final. Five months later, they did much the same to Hungarian champions Ferencvaros in the Inter-Cities Fairs Cup, winning by a single goal over two legs.

Despite Leeds’ reputation as one of the toughest teams in England, league success remained elusive. With their focus trained exclusively on the title, Revie’s men swept to the top of the table, going unbeaten from mid-October to belatedly clinch the First Division championship. After another season of near misses, Revie led Leeds to a second Fairs Cup triumph, and the FA Cup was finally added to the collection in 1972. 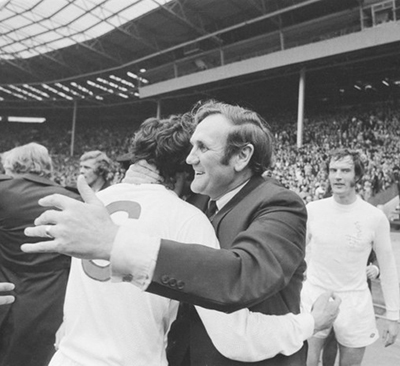 Revie was renowned for his man management skills and close bond with his players, demonstrated here with Norman Hunter after their 1972 FA Cup final victory. Image via Mirrorpix.

Though United could not build on their earlier European success – they lost the European Cup Winners’ Cup to AC Milan in controversial circumstances – Revie’s side did clinch the First Division title for a second time, seeing off Liverpool by five points. It proved to be Don’s last campaign as Leeds United manager, as he agreed to take the reins of the England national team that summer.

Thereafter, both parties struggled. Revie could not replicate his success with Leeds on the international stage, ultimately opting to quit the England post in 1977 in favour of a lucrative move to the United Arab Emirates. Leeds, meanwhile, appointed Brian Clough, a long-time critic of Revie, as his successor; his tenure proved disastrous, lasting a mere forty-four days.

However, Don Revie and Leeds United had proved a perfect match for over a decade. The schemer took a middling team in a rugby-oriented city and transformed it into one of the country’s leading outfits, and will forever be remembered for putting Leeds on the footballing map.