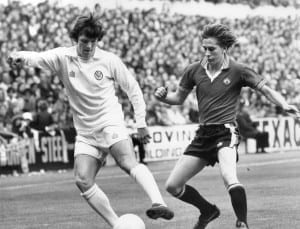 Eddie Gray was spotted as a Scottish schoolboy international and signed for Leeds United aged 16, scoring a memorable goal on his debut on New Year’s Day 1966.

Ranking alongside names like Matthews and Finney, Gray is one of the most stylish wingers the English game has seen, with an ability to perplex defenders through deft turns and unexpected changes in pace. He was central to Leeds’ League Cup and Fairs Cup victories in 1968 and League Championship success a year later.

His most memorable season was in 1970 when he scored two wonder goals in a league match against Burnley.  Gray put on a virtuoso man-of-the- match performance in the Wembley FA Cup Final against Chelsea, tormenting his marker David Webb time and again. 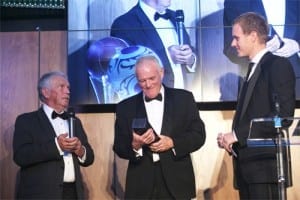 In contrast to the tough reputation of the Leeds side, Gray never received a booking. Despite constant injury problems, he continued in the side longer than most of his team mates, playing as a defender when Leeds was relegated in 1982.

For Leeds fans his status as an all-time hero is only surpassed by Bremner and Giles.  Revie’s much used quote, “when he plays on snow he doesn’t leave any footprints”, best sums up his place in football folklore.

Gray was inducted to the National Football Museum Hall Of Fame in 2013, receiving his award from another Leeds great, Johnny Giles, at an award ceremony at the museum in Manchester.