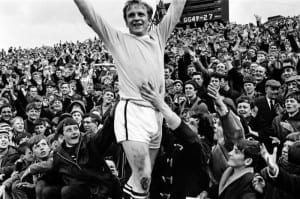 Franny Lee was the barrel-chested hitman whose goals were the final piece in the jigsaw of Manchester City's golden period.

Joe Mercer paid a club record £60,000 to sign Lee from his local side, Bolton Wanderers, in 1967. It was debt that would be repaid in full as Lee, converted from winger to striker, notched 148 goals for the Maine Road club in 330 appearances.

In an era when United's 'holy trinity' were taking on Europe, City's own attacking unit of Colin Bell, Mike Summerbee and Lee were conquering England. Lee's goals were key as City claimed the league in 1968, including the vital goal in a final-day 4-3 win over Newcastle which sealed the title. FA Cup victory was to follow in 1969, with Lee scoring vital goals on the way to the final. Lee was to be City's top scorer for four consecutive seasons and again was the man for the big occasion when converting the penalty which secured the European Cup Winners' Cup in 1970.

Lee's feisty attitude on the pitch earned him as much attention as his goalscoring feats, and a reputation for winning (and scoring) penalties was often in the thoughts of opposition fans and players. The nickname 'Lee Won Pen' stuck after the 1971-72 season in which Lee scored 15 times from the spot, but it was a reputation the man himself was keen to deny, leading to a famous confrontation with Norman Hunter which saw both men sent off (Lee had already won and scored a penalty in the game, much to Hunter's annoyance).

By the time of that confrontation, Lee had been sold to Derby County, for £110,000 in 1974. In his first season his 33 goals helped fire County to the Division One title. He was to score one of the most iconic goals of his career against his old team, with Barry Davies' commentary "Interesting...very interesting! Look at his face!" providing the soundtrack as Lee cut in from the wing to unleash a thumping shot into the top corner. An ebullient celebration suggested Lee was focused on his new club, but his affection for City remained.