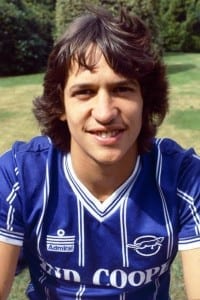 The 1986 World Cup Golden Boot winner also starred in England’s run to the 1990 World Cup semi-final, and finished as Division One’s top scorer three times, each with a different club.

His career began in Division Two with his hometown club. Over seven seasons with Leicester City Lineker was promoted twice but, having scored 29 goals in the 1984/85 season, he was finally prised away from Filbert Street by defending champions Everton for £800,000.

By this time, Lineker was known for his prowess in the opposition area. The striker’s ability to find space in the box, combined with great pace and a ‘poacher’s instinct’ made him one of the hottest properties in English football.

He was to spend just one season at Goodison Park, hitting 38 goals in all competitions and heading to the World Cup with England as the league’s top scorer and having scored his first of 5 England hat-tricks in a qualifying game against Turkey. 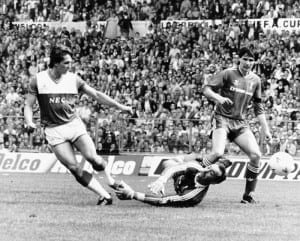 Everton V Liverpool F.A. Cup Final 1985/86 Season. Gary Lineker beating Bruce Grobbelaar to score Everton's only goal in the FA Cup Final against Liverpool, who went on to win the match three -one. May 10th 1986. Pic via Mirrorpix.

His next England hat-trick was to come in the World Cup itself, against Poland in the Three Lions’ must-win final group game. Three goals in the first 35 minutes illustrated Lineker’s deadly talent; each a one-touch finish applied within the box.

In all, Lineker scored 48 goals for England in 80 appearances. England manager Bobby Robson summed up his talent; “Gary was simply the best finisher I’ve ever seen.”.

Lineker was voted Footballer Of The Year after his performances for Everton and England in 1986, but was to finish the year playing at the Nou Camp, as Barcelona paid a record £2.2million for his services after the World Cup.

His manager at Everton, Howard Kendall, was aware of Lineker’s best qualities; “No one could match Gary’s pace over 40 yards.”. And it was that pace and instinct which he exploited throughout his career: just half a yard on his marker at the near post was often all Lineker needed to apply the deadly finish. 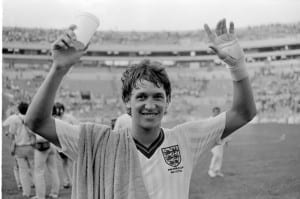 His three seasons in Barcelona were largely successful, with Copa Del Rey and European Cup Winners’ Cup victories meaning Lineker won his first pieces of major silverware with the Catalan giants. But as the system at the team changed, Lineker was moved wide – a position that failed to make the most of his natural instincts, and a return to England with Tottenham Hostpur followed in 1989.

Again, Lineker was the First Division’s top scorer on his return. The 1990 World Cup saw Lineker established as England’s biggest threat, and his experience around the likes of the young Paul Gascoigne was essential. This time, Lineker scored four goals en-route to the semi-final, including the goal which took that fateful match to extra-time and ultimately penalty defeat against West Germany. 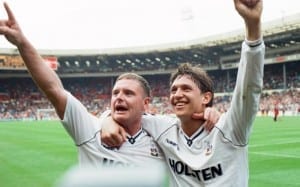 In 1991, Lineker won his only piece of domestic silverware, when Spurs triumphed in the FA Cup final.

Lineker left Spurs before the start of the first Premier League season, choosing to take up a new challenge in Japan with Nagoya Grampus Eight, although a persistent foot injury began to limit his ability to play, and he retired in 1994.

Perhaps the archetypal ‘box player’, Lineker’s bravery and willingness to gamble on where the ball would end up – often amongst the flying boots of the six-yard area – made him stand out. His sportsmanship was also exemplary; Lineker was never booked in over 600 club and international games.