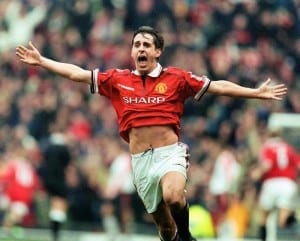 Hailing from a keen sporting family from Bury, Greater Manchester, Gary Neville joined his boyhood team Manchester United as an apprentice in 1991. The following year he achieved FA Youth Cup success as part of United's famous 'Class of '92', and made his senior debut for the club against Torpedo Moscow in the UEFA Cup.

Alongside his Youth Cup-winning teammates, Ryan Giggs, David Beckham, Paul Scholes and Nicky Butt, over the next few years, Neville firmly established himself as a first choice player for United. He also appeared for the national side, making his England debut in a friendly win against Japan in June 1995.

In the 1995/96 season - when the Red Devil's chances of winning 'anything with kids' were famously written off following a poor start to the season - Neville's accomplished performances at right-back (often appearing on the opposite flank to his brother Phil) helped the club to a Premier League and FA Cup double. Neville also played in four of England's Euro '96 matches, as the team reached the semi-finals.

Another league title with United followed in 1997, followed by a rare trophy-less season as Arsenal emulated United's double win. Regrouping, with Neville as an almost ever-present in defence, United toppled Arsenal to win the 1998-99 Premier League by a single point, defeated Newcastle United in the FA Cup Final (having knocked out the Gunners in the most dramatic style in the semis) and topped it all off with an incredible injury time turn-around to beat Bayern Munich in the Champions League Final, sealing an historic Treble.

While this feat would in some ways signal the beginning of the end for some of his fellow Class of '92 graduates, it wasn't even the half-way point in Neville's United career. He would go on to make almost 400 further appearances for the Old Trafford side, becoming club captain in 2005.

A battle with injury sustained in 2007 threatened to curtail Neville's career, but after a year of recovery he returned to action just in time to feature for United as they won a Premier League and Champions League double the following year. A further Premier League and League Cup victory completed Neville's trophy haul.

In February 2011, in his 20th year at Manchester United, Gary Neville announced his retirement from the game. Since that time, he has remained involved in football, as a coach with the England team, a TV commentator and pundit and as co-owner of Salford City F.C.