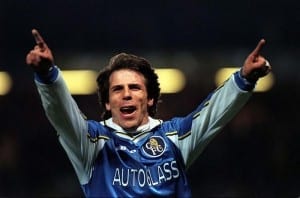 Gianfranco Zola celebrates scoring a stunning chip against Oxford United in their FA Cup Fourth Round Replay in February 1999. Image via Mirrorpix.

Affectionately nicknamed ‘Magic Box’ by the Stamford Bridge faithful, diminutive wizard Gianfranco Zola dazzled and amazed during his seven years at Chelsea, earning a reputation as one of the best players ever to have pulled on the blue jersey.

Having begun his career in Italy’s lower divisions, Zola moved to Napoli at the age of 23, and was duly taken under the wing of Argentina legend Diego Maradona. He quickly established himself as the focal point of the Light Blues’ attack, and would establish himself as one Europe’s most creative and technically gifted forwards.

A move to Parma in 1993 reaped rewards for both player and club, as the Yellow and Blues clinched the UEFA Super Cup and UEFA Cup in 1993 and 1995 respectively, before a change in tactical philosophy – implemented by future Chelsea manager Carlo Ancelotti - limited Zola’s playing time.

Seeking regular football in his preferred position, the Italy international headed to England, becoming part of Ruud Gullit’s continental revolution. He joined Chelsea in November 1996, linking up with compatriots Gianluca Vialli and Roberto di Matteo, and became an instant hit in West London.

The 30-year-old’s dribbling ability and eye for goal were apparent by Christmas. He frequently delighted Chelsea supporters with moments of individual brilliance, a Cruyff turn and finish against Wimbledon in the FA Cup semi-final arguably the pick of his twelve goals that year. With Zola leading the line alongside Mark Hughes, Chelsea went on to lift the FA Cup for only the second time in their history.

The FWA Player of the Year netted the same tally the following season as the Blues clinched both the League Cup and the UEFA Cup Winners’ Cup. Despite not being fully fit for the latter fixture, Zola made a telling impact from the bench, racing in behind the Stuttgart defence to smash home the winning goal. 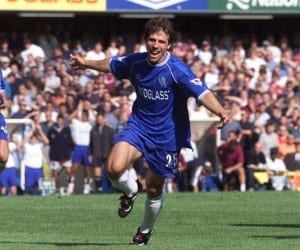 Gianfranco Zola is regarded as one of the best foreign players of the Premier League era, netting 59 league goals and laying on 42 assists during his seven years at Stamford Bridge. Image via Mirrorpix.

The veteran started fewer games the following season, rotated in attack with Chris Sutton and Tore Andre Flo, but did provide a crucial assist for di Matteo’s winner against Aston Villa in the 2000 FA Cup final. The rise of Eidur Gudjohnsen meant that Zola was no longer the first name on the teamsheet, but proved time and again that he was capable of conjuring up moments of magic – including a stunning backheeled volley against Norwich City in 2002.

The Italian experienced a career renaissance in what proved to be his final year at Stamford Bridge, scoring sixteen times in all competitions. The 2002/03 season saw Zola score two of his most memorable strikes – a remarkable curling free kick against Tottenham Hotspur, and last ever goal for the club, a fittingly beautiful lob to seal victory over Everton.

Gianfranco bowed out of English football with 312 appearances and 80 goals to his name, opting to spend the twilight of his career back home with Cagliari. New Chelsea owner Roman Abramovich pulled out all the stops to try and convince the Italian to remain in London, and the number 25 shirt has never been worn by another Blues player since. Just months prior to his departure, Zola was voted Chelsea's all-time greatest player by supporters, ahead of club legends such as Peter Osgood and Ron 'Chopper' Harris.

Zola later returned to these shores in a managerial capacity, taking charge at West Ham United, Watford and Birmingham City, but he will always be remembered as the spellbinding little magician who astounded Premier League audiences.