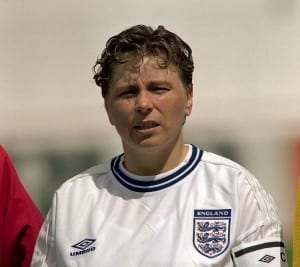 In August 1997 Gillian Coultard won her 100th cap for England, joining other centurions Billy Wright, Bobby Charlton and Bobby Moore. She was the first woman to reach the milestone, and has since been joined by some of biggest names in the current crop of Lionesses, including Fara Williams, Alex Scott, Jill Scott, Casey Stoney and Karen Carney.

Making her international debut as a teenager in 1981, Coultard was part of the England team which finished second to Sweden in the first UEFA European championships in 1984. She scored 30 goals in 115 international appearances, two of which came in the England’s first ever World Cup finals match in 1995. Coultard captained the Lionesses until 2000.

Gillian joined Doncaster Belles at the age of 13 and was a key figure in the club's rise to prominence. An all-action midfielder, towards the end of her career her reading of the game meant she adapted to playing as a sweeper. She made over 300 appearances whilst continuing a full-time job on a production line.