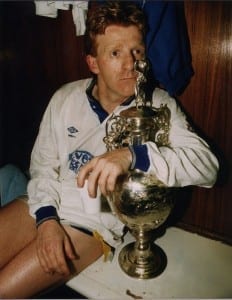 A pocket dynamo playing on the right side of midfield, Gordon Strachan was a skillful, creative player unafraid of the physical side of the game. Frequently a thorn in the side of opponents, as a player Strachan arguably enjoyed the greatest success of his English league career as the elder statesman in Leeds United's 1992 Division One winners.

Strachan's career started in his native Scotland, where made his senior debut for Dundee in 1974. The first of eight seasons at Aberdeen came in 1977/78, as The Dons, managed by Alex Ferguson from the following season, emerged as Scotland's most successful team of the era. A host of domestic trophies were to follow, as well as the European Cup Winners’ Cup and Super Cup in 1983.

A move South to Ron Atkinson's Manchester United in 1984 brought FA Cup glory the following season. Former boss Ferguson was to reuinte with Strachan at Old Trafford the following season, with the player reportedly saying he "didn't think he'd follow me this far South!"

Injury and inconsistency was to affect the rest of Strachan's time in Manchester, and Ferguson sold him to Leeds United, then in Division Two, in 1989. It was perhaps an unlikely renaissance, but the 32 year old, handed the captain's armband by manager Howard Wilkinson, was to become a fans' favourite at Elland Road.

He was the leading goalscorer as he captained the side to promotion in his first season and, as part of a midfield featuring the combative David Batty, his countryman Gary McAllister and the young Gary Speed, led the team to the final Division One Championship in 1992. In a team which also featured Eric Cantona, Strachan helped deny his former boss Ferguson the title, Leeds beating their rivals Manchester United to the title by 4 points. 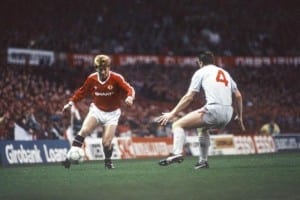 Strachan was voted the Football Writers' Player of the Year in 1991 and awarded an OBE in 1992. He won a total of 50 caps for Scotland. After a long career as a player, including a period as player/manager at Coventry City (which saw him set a Premier League record as oldest outfield player, aged 40), Strachan has gone on to manage Southampton, Celtic and Scotland.

An entertaining and opinionated figure, Strachan's regular appearances as a pundit and his press conference soundbites as a manager continue to mean 'Wee Gordon Strachan' is never far from the public eye.

He was presented with his Hall Of Fame award by his Dundee team-mates George Mackie & Alec Caldwell, and spoke about how lucky he was to spend his career in football: "Since I was 15 years old I've been paid to be a schoolboy...the people I've played with over the years have been phenomenal; I don't think of it (my career) in terms of winning things, it's the laughter and the joking over the last 45 years."

Strachan: "It's ironic i'm being inducted to the English Hall Of Fame as i'm about to be kicked out of the Scottish one..." #NFMHallOfFame pic.twitter.com/huihP5ZzQa