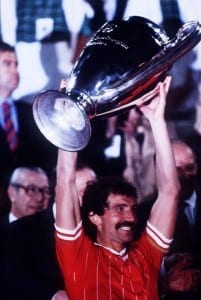 Liverpool captain Graeme Souness holds aloft the European Cup trophy after their victory over AS Roma in the Final in Rome. May 1984. Pic via Mirrorpix.

Graeme Souness is widely remembered as a tough-tackling, no nonsense midfielder who captained Liverpool in the early 1980s. One of only four men to lift the European Cup for Liverpool, his hard-man image and fearless commitment sometimes disguised a player of touch, vision and ability.

Souness began his career as an apprentice at Tottenham Hotspur, before joining Middlesbrough in 1972.  His 6 years at the club included promotion to the top flight as Second Division champions in 1973-74, under the guidance of Jack Charlton.

Souness’s playing career is undoubtedly remembered for his seven seasons at Liverpool, where he was part of an outstanding team that won 5 league championships and 3 European Cups.  At the time the £350,000 fee was a record between two English clubs, but he was soon to prove his value. He debuted in a win against West Brom in January 1978, with a first goal arriving the following month in a 3-1 win against Manchester United.

Later that year, Souness was part of the team that retained the European Cup, providing the final pass for Dalglish’s winning goal in a 1-0 Wembley win over FC Bruges. 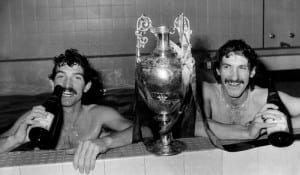 Champagne and a bath for Graeme Souness and Terry McDermott of Liverpool after today's championship triumph.
May 1980. Pic via Mirrorpix.

Souness’s first league title arrived the following season and a second European Cup came swiftly in 1981, with a win against Real Madrid.

Souness was awarded the captaincy for the start of the 1981-82 season and the club continued to flourish under his watch on the field.

The 1983-84 season brought triple success.  A fourth European Cup for the club with victory over AS Roma, a fifth and final league title for Souness and a League Cup win in the first all-Merseyside cup final.

Souness left Liverpool while arguably at his peak, joining Sampdoria for £650,000 in 1984. He had made 358 appearances for the Anfield club and scored 56 goals.

In his first season in Italy, Souness was part of a Coppa Italia winning side, the first in the club’s history. Souness’s playing career in Italy ended in 1986 as he took up the position of player-manager at Rangers, making a further 50 league appearances before retiring as a player in 1991 at the age of 38. 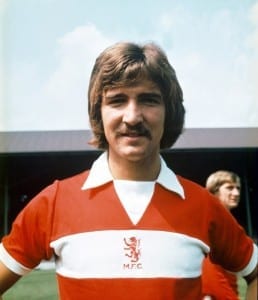 Souness’s career as a manager took in spells at 8 different clubs in 5 separate countries, with varying degrees of success.  His best performance probably came in his first job at Glasgow Rangers, where he won 3 league titles and 4 League Cups.

Souness’s dream job managing Liverpool was to be less successful than his time as a player: an FA Cup win in 1992 was a rare highlight of a period that saw an ageing squad overhauled and North West rivals Manchester United emerge as the major domestic power in England.

Souness’s managerial career also took him to Galatasaray in Turkey, Torino in Italy and Benfica in Portugal.  He also managed Southampton, Blackburn Rovers and Newcastle United.

Inducted to the National Football Museum Hall Of Fame as a player in 2007, Souness was presented with his award by Dave Mackay. Mackay, one of the Hall Of Fame’s inaugural inductees, had been Souness’ boyhood hero, with both midfielders having attended the same school in Edinburgh. Inducted at the same time as Dennis Bergkamp, Nobby Stiles and Peter Beardsley, Souness claimed the award would help his son believe his father had “ever played football”. An era of midfield opponents across Europe will struggle to forget Souness’ impact.