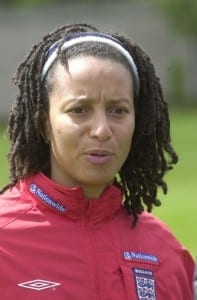 Hope Powell has been synonymous with the women’s game in England for over a decade. She was appointed as the first ever full-time National Coach of the England Women’s team in June 1998. She was the youngest ever England coach and the first female England coach. Significantly, Hope is one of the few women to have found both playing and managerial success.

As a player she was highly decorated: she played in four FA Women's Cup finals and captained Croydon to a League and Cup double in 1996. As a result Hope won 66 caps for England between 1983 and 1998, scoring 35 goals as an attacking midfielder. Powell began playing for Millwall Lionesses, moving on to rivals Friends of Fulham. Returning to Millwall lionesses, she became their all-time highest goalscorer. Powell later took the initiative and helped form Bromley Borough where she was later joined by fellow Hall of Fame star Brenda Sempare. Bromley amalgamated with Croydon FC and Powell’s career reached new heights. She is one of six Croydon players who represented England at the 1995 FIFA Women's World Cup.

Starting her coaching qualifications at the age of just 19, in 2003 Powell became the first woman to achieve the UEFA Pro Licence—the highest coaching award available. She led England to the quarter-finals of the 2005 European Championship and the final of the 2009 European Championship. Powell became so renowned that it was speculated she would become the first female manager in men’s football after being linked with Grimsby Town.

Powell earned a degree in Sport Science and History from Brunel University in 1990. She was also given an honorary doctorate from the University of East London. Much has changed during Powell’s career. Over 80,000 people turned out to watch the final of the women’s football at the Olympic Games in 2012.

Over 15 years in charge of the England side, she led them to two World Cup tournaments and four European Championships, including a run to the final in 2009. Her final tournament in charge was to be the 2013 European Championships, when a group-stage elimination after a strong qualification campaign fell below the standards Powell herself had set. Under her stewardship, women’s football in England had taken giant leaps in profile, professionalism and scrutiny.

Hope was awarded an OBE in 2002 and a CBE in recognition to her contribution.

"She is a tremendous ambassador for women's football and has been instrumental in the growth of the game” FA General Secretary Alex Horne, 2013.