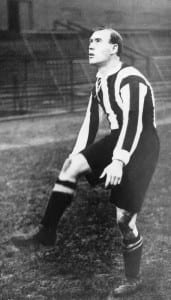 Hughie Gallacher has gone down in history as arguably Newcastle United's greatest ever striker, notching 143 goals in 174 games between 1925 and 1930.

Following 4 impressive years at Airdrie in his native Scotland, where he scored at the rate of almost a goal a game, Gallacher moved south of the border to Newcastle United in 1925.

At St James’ Gallacher made an immediate impact, scoring twice on his debut in a 3-3 draw with Everton. After only one season with Newcastle, he was made captain and led them to the 1st Division Championship in 1926-27, scoring 39 goals in 41 games in the process.

After being controversially sold against his wishes to Chelsea, Gallacher was welcomed back to St. James’ Park by 68,386 fans when his new club came to town, still Newcastle’s record attendance. He went on to score 72 goals in 132 games for the London club, before moving on to Derby. Gallacher finished his career back in his adopted North East at Gateshead.

Lacking natural physique Gallacher had excellent ball control, guile and instinct, going past opposing defenders with ease. He was just 5'5" but was known as a physically fearless player; opposition defenders who tried to muscle him out of the game often came off second-best. Possessing awesome strike power Gallacher scored five goals in a game on four separate occasions and is regarded as one of British football’s greatest centre forwards.

“He was the greatest centre-forward I ever saw... but he had more tricks than a bucket full of monkeys.” Frank Swift 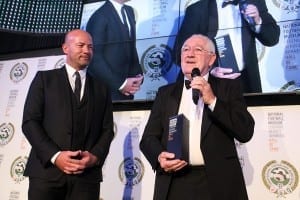 Gallacher scored 23 goals 20 appearances for Scotland and was part of the famous ‘Wembley Wizards’ who beat England 5-1 in 1928.

Inducted to the National Football Museum Hall Of Fame in 2014, Gallacher's son Matthew accepted the award from Alan Shearer, who told guests on the evening that he had once been told by his own father "no matter how many you score, you'll never be as good as Gallacher."