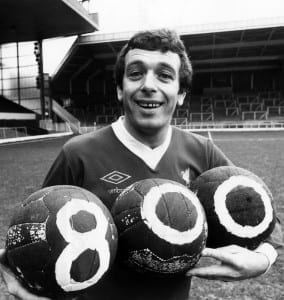 A Liverpool FC legend, Ian Callaghan made an incredible 857 appearances for the Anfield club, a total unlikely to ever be beaten.  In an 18 year spell with the reds, Callaghan won every principal honour and was also part of England’s 1966 World Cup winning squad.

Callaghan joined Liverpool as an apprentice in 1960, making his debut in a 4-0 win against Bristol Rovers on 16th April that year.  As a right winger, Callaghan quickly established himself in the first team, playing an important role as the club won the Second Division title in 1962.

Following promotion, it took Liverpool just two seasons to capture the First Division title, finishing four points clear of Manchester United in 1963-64.  This was the first of five for Callaghan whilst with the club.

The following season, Liverpool won the FA Cup, beating Leeds United 2-1 in the final at Wembley.  Having taken the lead in extra time and then being quickly pegged back, Callaghan’s cross for Ian St John’s winner ensured a first Cup triumph for Liverpool. 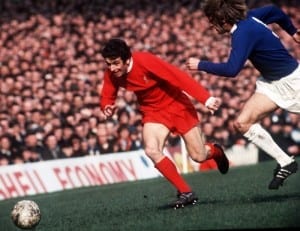 Another First Division title arrived in 1965-66 but this time a runner’s-up medal in a cup final, as Liverpool lost 2-1 to Borussia Dortmund in the final of the Cup-Winners’ Cup.

Although Callaghan’s England caps were small in number, he had an interesting international career nonetheless.  Having been picked by Alf Ramsey in his squad of 22 for the forthcoming World Cup, Callaghan made his debut versus Finland on 26 June 1966.  His second cap came in England’s third group game at the tournament, a 2-0 win against France.  Although he didn’t play again, Callaghan can be proud that he was one of only four to appear in the competition for England, outside of the final winning eleven.

Remarkably, Callaghan’s third and fourth caps did not arrive until the 1976-77 season, a gap of more than 11 years.  He was the final member of the 1966 squad to appear for England. 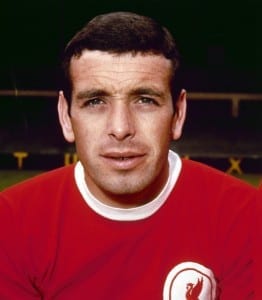 By the early 1970s, Callaghan had moved into central midfield.  Further success came in 1972-73, with a third Division One title and a UEFA Cup Final win against Borussia Monchengladbach.  A second FA Cup arrived the following season, as did some personal accolades.  Callaghan was named Football Writers’ Footballer of the Year and was awarded the MBE for services to football.

In 1975-76, Callaghan was part of a team that achieved a league and UEFA Cup double, his fourth and second respectively.  The league was particularly tight that season with victory only coming in the closing minutes of the final match away at Wolves.

Callaghan’s crowning glory came in one of his final seasons at the club, 1976-77.  After a fifth league title had been achieved, Liverpool met Monchengladbach again in the club’s first ever European Cup Final.  A 3-1 victory ensured that Callaghan would add one more significant medal to his already impressive trophy cabinet.

The cup was retained the following year, with Callaghan a non-playing substitute.

After leaving Liverpool in 1978, Callaghan went on to play for Swansea City and had loan spells overseas in the US and Australia.  His final professional appearance was for Crewe Alexandra away at Halifax Town on 20 March 1982.

A multitude of club honours, a record number of appearances and a World Cup to boot, Callaghan was one of the greatest players in Liverpool’s history.