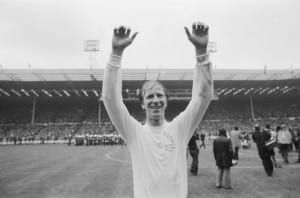 Jack Charlton acknowledges the Leeds United supporters after their 1-0 victory over Arsenal in the 1972 FA Cup final at Wembley. Image via Mirrorpix.

A World Cup winner and one-club man for Leeds United, Jack Charlton was the archetypal English centre-half; strong in the tackle, indomitable in the air and a leader in the heart of defence.

Jack was born into a footballing family in Ashington, Northumberland. While younger brother Bobby was picked up by Manchester United at the age of fifteen, Jack toyed with the idea of a steadier career outside of the game, briefly following his father into the coal mines and applying to join the police force.

He ultimately opted to join Leeds United’s youth team, and signed professional terms at the age of seventeen. He would soon emerge as a bright young candidate to take John Charles’ place in the heart of defence after the Welshman was moved up to centre-forward.

Two years of National Service and concerns regarding his lifestyle hindered Charlton’s early career, and when Don Revie took charge in 1961, he attempted to deploy Jack as a centre-forward, with mixed success. Though Charlton was allowed to leave the club, prospective moves to Liverpool and Manchester United did not materialise, and the defender ultimately signed a new deal at Elland Road.

Charlton would go on to become one of the key figures in the Whites’ resurgence. Back at centre-half alongside new signing Norman Hunter, the 26-year-old was the most senior figure in Revie’s new-look defence. He assumed organisational duties thereafter, and was a key proponent of the zonal marking system adopted by Leeds during that period. He was also one of the first to stand alongside the opposition goalkeeper on set pieces; a trait which is now commonplace in the modern game.

With a rock-solid Charlton anchoring the defence, Leeds United went from a relegation-threatened Division Two outfit to top-flight title challengers. The formidable, physical partnership of Charlton and Hunter would persist throughout the sixties and into the seventies, playing a significant role in United’s golden era. 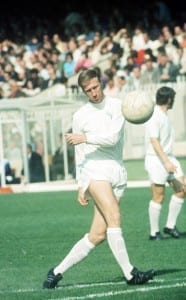 Charlton racked up 762 appearances for Leeds United during 21 years at the club. Image via Mirrorpix.

His form for Leeds eventually garnered the attention of Alf Ramsey, who handed the senior Charlton a belated call-up one month shy of his thirtieth birthday. The no-nonsense defender complemented the more expansive play of skipper Bobby Moore; together, they occupied the heart of defence during England’s victorious 1966 World Cup campaign. Charlton accrued 35 caps in total for the national side, only featuring on the losing side twice in five years.

Although his England place was eventually taken by Brian Labone, Charlton remained a key fixture for Revie’s Leeds. He featured prominently in both Inter-Cities Cup triumphs, helped Leeds lift the League Cup in 1968, and was a mainstay during the club’s title-winning campaign one year later. He was also named FWA Footballer of the Year in 1967, an honour bestowed upon his brother the previous season.

Jack tasted success for a final time in 1972, shutting Charlie George out of the game in a 1-0 FA Cup victory over Arsenal. However, the aging defender was often replaced in the starting line-up by Gordon McQueen during the 1972/73 campaign. Approaching 38, Charlton picked up a hamstring injury in the FA Cup semi-final win over Wolves, and could not recover in time for the Wembley final. He retired that summer, having racked up 762 competitive appearances for the Whites – a record which stands to this day.

Charlton moved into management shortly after, enjoying spells at the helm of Middlesbrough and Sheffield Wednesday, briefly returning to the former as caretaker in 1984. After preserving Boro’s Second Division status, he had a brief stint at Newcastle United – a club he supported from boyhood – before leading the Republic of Ireland to three major tournaments in the space of ten years.