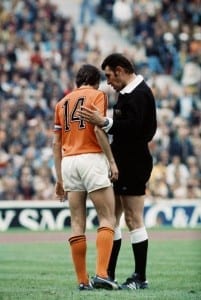 This Wolverhampton butcher is the first referee to enter the National Football Museum Hall of Fame. Jack Taylor refereed more than 1,000 games and 100 internationals over 33 years. He was respected throughout the game for his no nonsense approach; “man management” as he called it.

Playing as a schoolboy for Wolves gave him a good grounding for a career as a ref. He officiated at the 1966 FA Cup Final and the 1971 European Cup Final, both at Wembley.

The pinnacle of his career was his selection to referee the World Cup Final in 1974, between West Germany and Holland, with Beckenbauer and Cruyff as star players. While 1 billion people watched worldwide, he awarded a penalty after just one minute against the home side West Germany, the first ever in a World Cup Final. 25 minutes later he awarded another against the Dutch. Both were brave decisions but 100% correct.

Taylor's services were in demand worldwide, and he finally left his trade as a butcher to travel the world, refereeing cup finals on four continents and spending two years in Brazil. In later life he was a commercial director for Wolves, and part of The Football League's Referee's Committee.

Taylor passed away in 2012, when Football League chairman Greg Clarke summer up Taylor's legacy, stating "Jack Taylor set the benchmark for refereeing, not just in this country but across the world...

"Very few people in football can match the contribution made by Jack Taylor and fewer still have managed to do it whilst retaining the respect and admiration of absolutely everyone they have come into contact with."