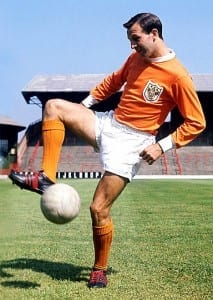 Jimmy Armfield is widely regarded as the first overlapping full-back. The pioneering right-back used to get forward at every opportunity in an era where players in his position rarely ventured beyond the half-way line.

Armfield joined his local side Blackpool as a teenager in 1954, where he played behind the great Stanley Matthews. Matthews' aura gave the youngster an opportunity to attack as teams put two markers on the veteran.

‘We were playing Wolves at Bloomfield Road and, sure enough, there were two players marking the great man. So I went for it. I skipped past their left-half and left-back, called for the ball and Stanley provided the perfect pass.'

After the game, Blackpool’s manager, Joe Smith, was not impressed. ‘What was all that about?' he fumed. ‘All that running up and down. Now listen, if I wanted you to be a right-winger you would have a number seven on your back, not a number two. And in case you hadn't noticed, the number seven we've got is plenty good enough.'

Armfield’s dynamic style quickly won over Smith and in 1957 a bid was rejected from Manchester United. He would remain at Blackpool throughout his playing career and captain them for 13 years. 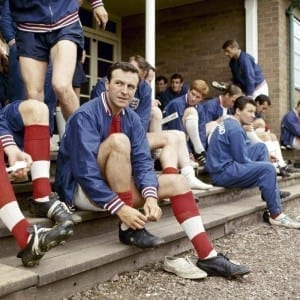 His international debut came against Brazil in 1959 and he captained England at the 1962 World Cup. Named in the 1966 World Cup squad, he unfortunately picked up an injury in the build up and played no part in the tournament. Despite this, as a senior professional, Ramsey sought his opinion on a number of occasions.

‘In my playing days, people used to call me Gentlemen Jim, probably because I was never sent off in 626 games for Blackpool, 43 appearances for England and nine Under-23 internationals. I was booked just once, for two successive fouls in an FA Cup tie against Norwich,' Armfield wrote. ‘I had played more than 500 League games by then and the referee was almost apologetic.'

Armfield's club career with the Tangerines was to see him miss out on any major silverware, finishing 2nd in the league in 1956. However he was awarded a 1966 World Cup winners' medal in 2009, alongside the other members of the squad who didn't play in the final. 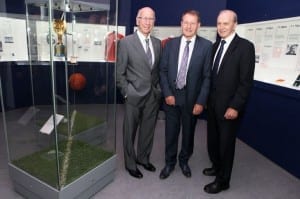 In March 2010 Bloomfield Road’s Jimmy Armfield Stand was opened and his statue was unveiled in May 2011.