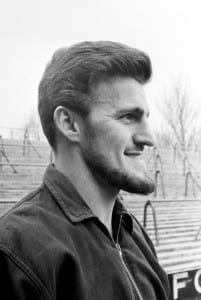 Jimmy Hill of Fulham in training ahead of the 1958 FA Cup Semi-final.
18th March 1958. Pic courtesy of Mirrorpix

Jimmy Hill, inducted into the ‘Special Achievement’ category of the Hall of Fame, was one of the most influential figures in English football. Known to many in the 1970’s and 1980’s as a pundit, commentator and anchorman, particularly on the BBC’s Match of the Day, Hill’s association with football covered every aspect of the game. His commitment and dedication took him from footballer, to manager and from director to club chairman. He was also a qualified referee and memorably stepped in to take over from an injured linesman at a match between Arsenal and Liverpool in 1972.

However it was as chairman of the Professional Footballer’s Association (PFA) that his legacy has been most keenly felt. Becoming chairman in 1957, while still playing, he campaigned to have the Football League’s maximum wage of £20 scrapped. This was achieved in 1961 after the threat of a footballer’s strike called by Hill enabled his Fulham teammate Johnny Haynes to become the first £100 a week player. 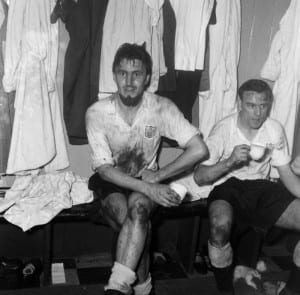 Hill’s footballing career began in the late 1940’s with Folkestone and then Brentford. A move to Fulham in 1952 saw him play 276 matches across nine seasons, before retiring in 1961. He then moved into management, managing Coventry City until 1967. His time there was one of change for the club; he gave them a new kit, a new nickname (the Sky Blues), introduced a Sky Blue train for supporters, laid on pre-match and half time entertainment and helped create an all seater stadium. He even found time to co-write the club song. When Hill joined the club they were in the old third division; by the time he left they had been promoted to Division One.

Always the innovator, Hill then worked in television for nearly forty years, primarily associated with Match of the Day, making 600 appearances. While covering the 1970 World Cup he was credited with the idea of using football pundits to analyse matches from the tournament. 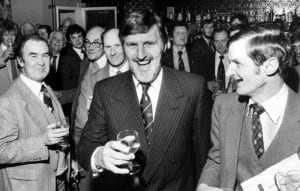 Jimmy Hill , chairman of Coventry City Football Club shares a joke and a drink with some of the shareholders after the Club's shareholders AGM meeting.
7th December 1981. Pic courtesy of Mirrorpix.

He returned to Coventry City in 1975, as managing director and then chairman. Continuing to innovate, he was behind everything from Coventry's sponsor at the time, Talbot cars, having their logo incorporated into their kit design, to pushing forward the idea of '3 points for a win'. Introduced to English football in 1981, it was adopted worldwide by 1994.

Hill's commitment to improving the game for fans at home as well as in stadiums saw him revolutionise TV coverage, with more in-depth analysis and punditry on Hill's programmes than had been seen previously. 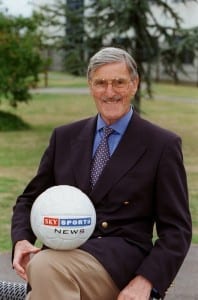 Having been LWT's Head Of Sport from 1967 to 1973, his move to Match Of The Day saw the BBC's football coverage similarly rejuvenated. He went on to host 'Jimmy Hill's Sunday Supplement for Sky Sports from 1999 to 2006. Increasingly a figure who was synonymous with football on TV, Hill became a larger-than-life character, happy to embrace and have fun with his own image in popular culture. He received the OBE for services to football in 1994.