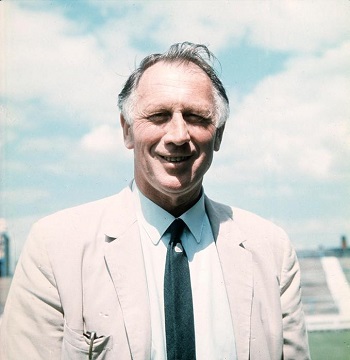 A capable midfielder during his playing days, Joe Mercer is best remembered as the man who presided over Manchester City’s golden age in the mid-sixties and early seventies.

Joe was born in Ellesmere Port, and followed in his father’s footsteps by turning out for the town’s football club before embarking on a professional career. He turned out for Everton in the eight years preceding the Second World War, lifting the FA Cup and the First Division championship in his time at Goodison Park. When football resumed in 1946, Mercer headed south to Arsenal, winning another FA Cup and two more league titles as Gunners captain.

A broken leg sent Mercer into retirement at the age of 39, and he continued his grocery business thereafter, as well as dabbling in the world of journalism. He returned to football as manager of Sheffield United, but could not save the Blades from relegation. Mercer suffered the same fate at Aston Villa in 1960, but his young charges returned to Division One at the first time of asking.

Mercer struggled with illness during his time at Villa Park, and was dismissed while recuperating at home in 1964. One year later, he recovered enough to take charge at Manchester City, then languishing in the Second Division. He installed the up-and-coming Malcolm Allison as his assistant, tasking him with the more rigorous day-to-day coaching duties. The partnership would yield six trophies in as many years.

Future City legends Mike Summerbee and Colin Bell were brought to Maine Road in Mercer’s first year. The club soon re-established itself within the upper echelons of English football, emerging from the Second Division as champions in 1966.

"JOE WAS A TERRIFIC BLOKE TO WORK FOR AND, AS A MANAGER, I WOULD PUT HIM UP THERE WITH THE BEST." TONY BOOK

Mercer set about building, in commentator Kenneth Wolstenholme’s words, “the most exciting team in England”. Bolton Wanderers forward Francis Lee was snapped up for a club record £60,000, joining Summerbee, Bell and Neil Young in one of the country’s most prolific attacking forces. All three were on target in the final day decider against Newcastle United, winning 4-3 to clinch City’s first top-tier title in over thirty years.

The following season, Mercer’s Citizens tasted victory again, this time in the FA Cup. Young scored the decisive goal in a 1-0 triumph over Leicester City as City lifted the trophy for a fourth time. Mercer himself became the first person to win the league championship and FA Cup as both a captain and a manager, having done so during his playing days at Arsenal. 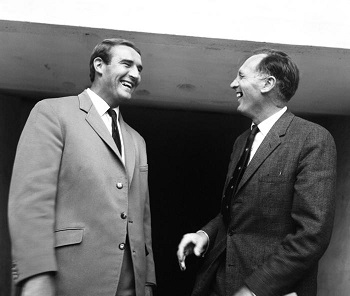 Though City could not improve on the previous year’s mid-table finish, they did collect two more pieces of silverware in 1970. First, they saw off the challenge of West Bromwich Albion in the League Cup final, winger Glyn Pardoe sealing a 2-1 win in extra time, before lining up against Gornik Zabrze in the European Cup Winners’ Cup final one month later. The Citizens triumphed by the same scoreline, a Francis Lee penalty proving enough to ensure victory.

The Mercer-Allison team would not win another trophy thereafter, though they did reach the Cup Winners’ Cup semi-final in 1971. Machinations at boardroom level created a rift between Mercer and Allison, and the former ultimately left his post in June that year, succeeded by his number two.

Mercer took up the reins at Coventry City for two years, later becoming a director at the club. He also served as caretaker manager of the England national side, having been linked with the permanent position on numerous occasions throughout his managerial career.