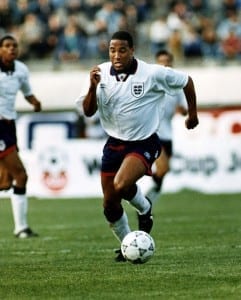 John Barnes in action for England against Turkey in the World Cup qualifying match in Izmir
April 1993. Pic via Mirrorpix

England winger John Barnes became an on-and-off pitch superstar during the 80s and early 90s. Developing his skills at Watford under Graham Taylor, Barnes quickly became the vital part of a team that won promotion from the 2nd Division in 1982 before finishing as runners-up in the top flight the following season.

"THE BEST PLAYER I EVER PLAYED WITH, BAR NONE."PETER BEARDSLEY

His first goal for England was his most memorable, an incredible mazy dribble in a friendly against Brazil in the Maracana Stadium in 1984 that announced Barnes as a player of true international pedigree. Brought on as a substitute in the quarter final of the 1986 World Cup against Argentina, he almost saved the match supplying crosses for Gary Lineker that delivered one goal and one agonisingly close miss.

As with many black players in the 1980s, he suffered the racism that was endemic in the game at the time, but became known as perhaps the best player in Kenny Dalglish’s hugely-successful Liverpool side following his 1987 transfer. 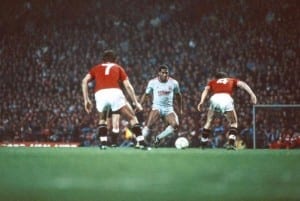 Under Dalglish he was central to the success of a team that also included Peter Beardsley, John Aldridge, Ray Houghton and later, Ian Rush. Peter Beardsley subsequently said of Barnes that he was “the best player I ever played with, bar none.” At the end of his first season at Liverpool he was voted winner both of England’s Player of the Year awards, winning the FWA Player of the Year again in 1990. Liverpool lifted the First Division trophy in 1988 and 1990, and Barnes got his hands on the FA Cup in 1989 and 1992.

Meanwhile off the pitch Barnes’ star continued to rise, with major sponsorship deals and even a guest rap in the England 1990 World Cup song ‘World In Motion’ by New Order, guaranteeing a cult popularity that continues to this day.

He went on to win 79 caps for England, the last of which came in 1995. However, many observers felt that Barnes’ early promise in an England shirt failed to blossom, due to a rigid team structure that did not make the best of his unique talents.

At his peak, Barnes was the classic flying winger, blessed with pace, trickery and an eye for goal that made him a natural crowd-pleaser. Towards the end of his career with Liverpool, Barnes reinvented himself as a deep-lying midfielder, filling the same role during Premier League stints with Newcastle United and Charlton Athletic before retiring in 1999.