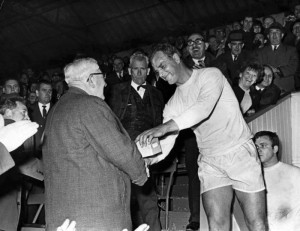 John Charles collects a runners up medal for Hereford United, late in his career, 1968. Pic courtesy of Mirrorpix.

John Charles, the gentle giant from Swansea who became a hero in Turin, is arguably British football's greatest ever export.

Beginning his league career with Leeds United in 1949, even at the age of 17 it was clear that Charles; 6'2", strong, fast, good in the air and with two good feet, was a talent to be reckoned with. Initially he was an imposing centre-half, but it soon became clear he could do just as much damage in the opposition box: early in the 1952-53 season he was given a run of games at centre-forward, notching 11 times in six matches.

Having fired Leeds into the First Division, he was to spend only one season playing with them there, hitting 38 goals in 40 games to prove he could mix it with England's best. But a British record £65,000 fee in 1957 was to mean Charles would soon be up against the continent's finest too.

"...the most effective player I ever saw, the one that made the most difference to the performance of the whole team, was without question John Charles." Jack Charlton

Juventus made Charles one of the first exports of British football, but his gentle demeanour, professionalism and on-pitch commitment made him an almost instant hit at the Turin club. In five years of Serie A, where he was again used at both ends of the pitch, Charles won three league titles and two Coppa Italia, scoring 95 goals and famously never collecting even a single booking. In fact, Charles went his entire career without picking up either a caution or a sending-off. His strength and ability simply meant he almost never needed to foul an opponent to come out on top.

"If you had 22 players of John's calibre, there would be no need for referees - only time-keepers." Clive Thomas, referee 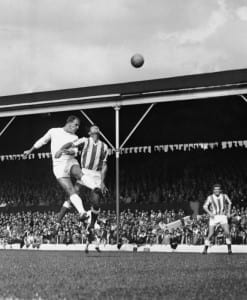 Charles played for Wales in the 1958 World Cup, but was injured for the 1-0 defeat to eventual champions Brazil. Wales manager Jimmy Murphy was amongst those who felt Charles would have made a vital difference in a game won by a single goal, scored by a young Pele in his first World Cup competition.

After five successful years in Italy, Charles returned to Leeds, but struggled to re-adapt to British football. Subsequent spells at Roma, Cardiff City and as player-manager at Hereford United never quite saw Charles regain his imposing best form.

A truly world-class competitor in not one but two positions, John Charles utilised his height, strength and pace to great effect at both ends of the pitch, and was unanimously adored by teammates and fans alike. He was considered a gentle giant not just in the physical sense; his presence alone could unite a dressing room and provide a much-needed confidence boost to those around him.

Charles passed away in 2004, aged 72. However 'the Gentle Giant' is still loved by fans in Leeds and Turin; with a stand at Elland Road named in his honour and revered as Juventus' finest ever overseas player, Charles' legacy is assured.