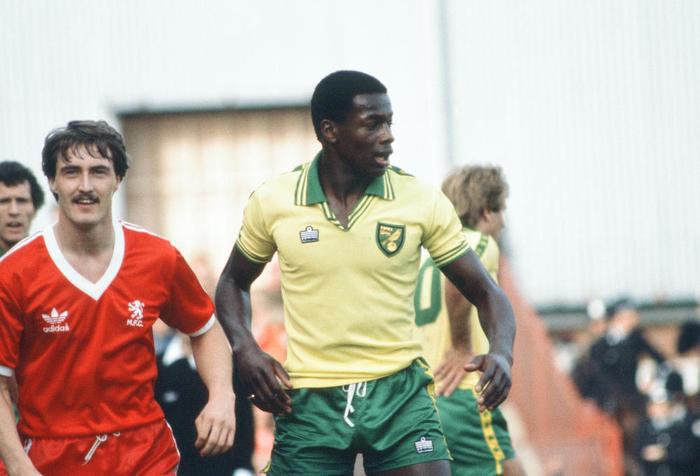 A dangerous and promising forward, Justin Fashanu was the first professional footballer in England to come out as gay - and remains the only male professional player in the country to have done so.

Brought up alongside foster parents with brother John, Justin showed early promise as part of the Norwich City academy, signing professional terms in December 1978. Within a month, he was making his league debut for the Canaries, and fast became a regular fixture in John Bond's side. His stunning strike against Liverpool in February 1980 - a stunning volley from outside the area - was voted BBC Goal of the Season, and has gone down as one of the greatest goals ever scored at Carrow Road.

Despite bagging 19 league goals in 1980/81, Norwich City were relegated at the end of the campaign. During this season, Fashanu had also established himself within the England youth setup, scoring five goals in eleven under-21 games. Fashanu's performances and prolific scoring record caught the eye of a number of clubs, including recent European Cup champions Nottingham Forest. In joining Forest, Fashanu became the country's first black £1 million player.

However, Fashanu struggled to replicate his form at the City Ground, in no small part due to a strained relationship with manager Brian Clough revolving around his sexuality and lifestyle. Fashanu was soon frozen out of the first team and sent on loan to Southampton in 1982. He impressed in his stint on the South Coast, scoring three times in nine games, but finances prevented the Saints from making the deal permanent.

Fashanu was sold to Forest's local rivals Notts County for £100,000 - a tenth of what the club had paid just one year prior. Justin duly recaptured his goalscoring form, netting frequently for the Magpies, though he was unable to prevent the club from back-to-back relegations. A knee injury suffered at Brighton & Hove Albion in 1985 looked to have ended his career prematurely, but Justin returned to these shores after spells in North America, making a handful of appearances for the likes of West Ham United, Manchester City and West Ham United. 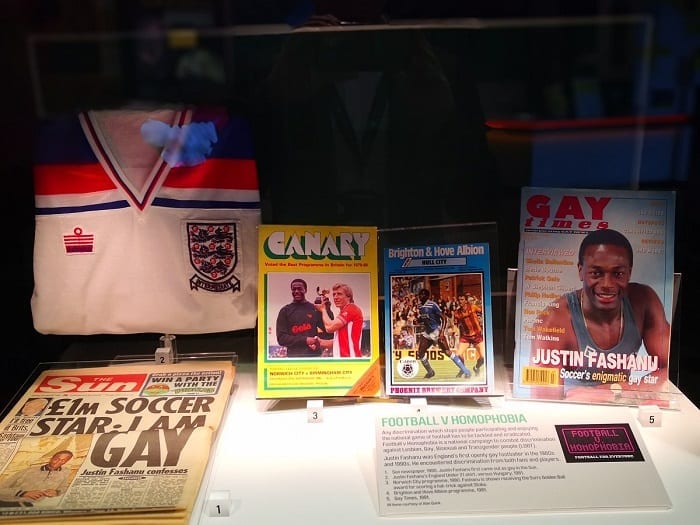 Items from Justin Fashanu's playing career, including a shirt worn during an England under-21 fixture.

In October 1990, fearing that he was about to be outed by a national newspaper, Justin Fashanu came out as gay via an interview with The Sun. In doing so, he became the first openly gay professional footballer in the UK.

Justin featured for non-league outfits Southall and Leatherhead and had an unsuccessful trial with Newcastle United, but would ultimately join Torquay United in November 1991. He went on to score 15 goals in 41 appearances for the Gulls, before finishing his career the likes of Airdrieonians and Hearts.

Once his playing days were over, Fashanu moved to the United States. In May 1998, he returned to London, where he took his own life at the age of 37.

To this day, Justin remains the only gay male professional footballer in this country. His legacy lives on through the work of LGBT+ campaigners, the Justin Campaign and The Justin Fashanu Foundation, founded by his niece Amal. He remains an inspiration and a source of courage on and off the pitch.