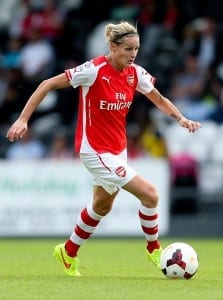 Arsenal and England's legendary goal-getter Kelly Smith, in action for the Gunners. (Image via the FA)

Renowned as one of the country’s most technically gifted and prolific finishers, Kelly Smith is considered one of the greatest players ever to pull on an England shirt.

Smith’s talent was evident from a very young age, showcasing her predatory instincts with Pinner Park before honing them further at Wembley Ladies. The teenager caught the eye in two seasons with Wembley, earning a move to Women’s Premier League titans Arsenal Women.

Despite enjoying a successful first year at Meadow Park – proving instrumental in the title-clinching victory over Liverpool – Smith sought to broaden her horizons, opting to join the more competitive women’s football scene in the United States.

She turned professional with the New Jersey Lady Stallions in 1999, but two long-term injuries and the collapse of the Women’s United Soccer Association affected her career Stateside, though she continued to feature regularly for England Women when fit.

She returned to North London with Arsenal in 2004, overcoming injury to seal another title for the Gunners. Smith’s prowess was never in doubt, and she finished the following season as the WPL’s top scorer, earning another championship medal to boot, and was similarly destructive throughout Arsenal’s famous Quadruple-winning campaign, finding the net 30 times in just 34 games.

"KELLY IS ONE OF THOSE PLAYERS WHO COME ALONG ONLY ONCE OR TWICE IN A LIFETIME. IN THE MEN'S GAME YOU'D THINK OF DIEGO MARADONA OR MESSI, PLAYERS WITH A UNIQUE TALENT, AND THAT'S WHAT KELLY HAS." HOPE POWELL

Smith’s reputation as a world-class forward led to fervent interest across the pond, and, after completing a further Double with the Gunners, she once again moved to the US, this time with Boston Breakers. Despite struggling with further injuries, Kelly still managed a positive goal return in Massachusetts, before the dissolution of Women’s Professional Soccer once again left the striker without a club.

Now in demand, Smith rejected overtures from top European clubs to see out her career at Arsenal, where she combined playing duties with a coaching role.

On the international stage, Smith was every bit as clinical. Just months after completing her GCSEs, the 17-year-old netted her first ever England goal, and went on to score 45 more over the next twenty years, leading the line for the Lionesses at three European Championships and two World Cups. She currently tops England Women's all-time goalscoring charts; only Lineker, Charlton and Rooney have scored more for the men's side.

Smith was much more than just a potent centre-forward. Her ability to control and manipulate the ball was second to none, and her exquisite passing skills and range of vision offered teammates different options in the final third.

Her quick feet and lightning pace, particularly in her earlier career, made Smith one of the most rounded, feared and respected forwards in world football.