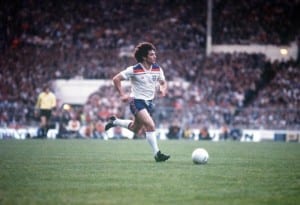 Born in Doncaster, Kevin Keegan made his professional debut for nearby Scunthorpe in 1968, aged 17. The skilful forward caught the eye of Liverpool’s Bill Shankly and made the move to Anfield in 1971. At Liverpool, Keegan won three Division One Championships, two UEFA Cups, one FA Cup and the European Cup.

After 323 appearances and 100 goals, Keegan left Liverpool in 1977 to join Hamburg SV in West Germany where he became the highest paid player in the country. Here, the 5ft 8in superstar earned the nickname Mighty Mouse and won European Footballer of the Year twice.

Keegan left for Southampton in the summer of 1980 and in 1982, he was awarded PFA Player of the Year and the OBE for services to Association Football.

In 1982 he surprised and delighted fans by signing for Newcastle United where he helped get them promoted to the top flight in 1984. Keegan retired from playing that same year. His final appearance for Newcastle came in a friendly against Liverpool where he left the ground in a helicopter, still dressed in his kit.

Keegan won a total of 63 England caps, scoring 21 goals and captaining the side 31 times.

In 1992, Keegan took his first managerial role at Newcastle United where he achieved promotion to the Premier League in 1993. He briefly managed Fulham before becoming England manager in 1999. Keegan was manager of Manchester City between 2001 and 2005 and returned for a short spell as Newcastle United manager in 2008.