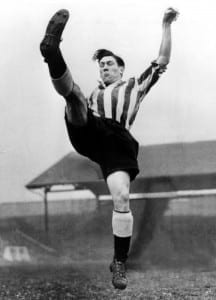 Len Shackleton, seen here in action for Newcastle United in 1946. Pic via Mirrorpix.

Dubbed the “Clown Prince of Soccer”, Len Shackleton was one of English football’s most prominent entertainers, bamboozling defenders and delighting supporters throughout the forties and fifties.

Shackleton, a Bradford City fan from a young age, instead started his career as an amateur at his hometown’s other club, Bradford Park Avenue. News of his talents reached Arsenal manager George Allison, who snapped up the 16-year-old in 1938. Within a year, Shackleton was told that he was too small to make it in the professional game.

Returning to Yorkshire on the outbreak of the Second World War, Shackleton took up roles as a radio assembler and a miner, all the while turning out for Park Avenue. He turned pro with the club in 1940, but also guested for a number of other sides in the area.

Though frequently at the top of the scoring charts, Shackleton’s antics did not always go down well with the home supporters. By 1946, the mercurial forward was complaining about the reception he received from the Park Avenue crowd. Having scored 175 goals for the club - most of which were scored in the wartime leagues - Len was angling for a move elsewhere.

Newcastle United, then in the Second Division, stumped up £13,000 to bring Shackleton up north. He went some way to justifying his price tag on his debut, bagging six goals in the Magpies’ 13-0 drubbing of Newport County. The St James’ Park faithful responded to Shackleton’s flicks and tricks with the desired applause, but a series of arguments with the board preceded his departure in February 1948.

Although Shackleton moved up an entire division, he didn’t have to travel far from his previous home. Sunderland, then labelled the “Bank of England” club due to their lavish spending on players, broke the transfer record to prise the attacker away from their local rivals, splashing out £20,050 to add his name to their increasingly star-studded roster. 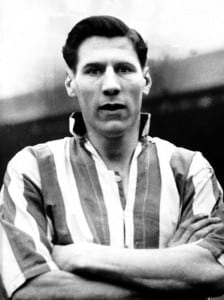 Len Shackleton signed for Sunderland in 1948, costing £20,050 - a British transfer fee record at the time. Pic via Mirrorpix.

In terms of the goals-to-games ratio, it was money well spent. “Shack” found the net precisely one hundred times for the Black Cats, but despite owning one of England’s most precocious talents, Sunderland’s expensively assembled side did not lift any silverware. They came desperately close in 1950, finishing just one point shy of champions Portsmouth. Billy Murray’s men also reached the FA Cup semi-final in 1956 and repeated the feat in 1957, but for all his skills and wizardry, Shackleton’s trophy cabinet remained bare.

The outside forward is, however, fondly remembered by those fans who were lucky enough to have witnessed him in full flight, embarrassing entire defences with his slick dribbling and magical footwork. Teammates described Shackleton as capable of controlling the ball as though it were on a string, completely at his beck and call.

One famous anecdote concerns Shackleton humiliating his old club Arsenal, putting his foot on the ball in the penalty area and pretending to check his watch and comb his hair. Such tales of his antics are commonplace, with backheeled penalty kicks and wall passes with the corner flag just some of the tricks in Len’s repertoire.

Though few could doubt his incredible ability, many were not amused by antics, particularly those forwards who felt starved of service as a result of his tendency to dribble rather than pass. Len’s unique playing style also cost him greater recognition on the international stage. Shackleton made just five appearances for England over a six-year period, scoring once in his final outing against West Germany.

National team manager Walter Winterbottom, while admiring the player’s talent, told journalists "If only Len would come half-way to meet the needs of the team there wouldn't be many to touch him". Another England selector summed up the attitude to Shackleton's showboating, telling reporters that “we play at Wembley Stadium, not the London Palladium”.

Shackleton retired in 1957, succumbing to a long-standing ankle injury on the opening day of the season. He went on to become a sports journalist, and his autobiography famously featured a chapter on the average director’s knowledge of football, consisting of one pointedly blank page.

He may have proved an expensive acquisition for both Newcastle United and Sunderland, but football fans were always guaranteed value for money when buying a ticket to the Len Shackleton show.