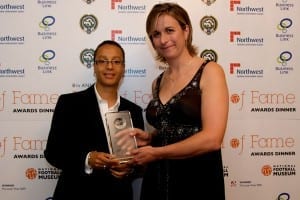 To many watching the women's game during the 1980s and 90s, Marieanne Spacey was the outstanding player of her generation. In an era when England were beginning to play on the world stage and the profile of the game was growing, Spacey was a figurehead; a skilful, successful player regularly lifting silverware.

Having begun her career with the Friends of Fulham club, and spells in Italy and Finland, Spacey's success with Arsenal began in 1993. Manager Vic Akers gave Spacey's talent freedom, deployng her in a role behind two strikers. Akers felt Spacey had "good technique, ability on the ball, pace and power, and she was capable of scoring goals from all over the pitch." In eight seasons Spacey won 3 Premier League titles and 4 FA Cups with Arsenal. Her final season saw her finish as the club's top scorer and voted Players' Player of the Year. Her domestic swansong was a treble-winning season with Fulham Ladies, before a move into coaching and management, initially with Fulham, then England. Named England Assistant Manager in 2013, her presence with the team at the 2015 World Cup was credited as a big boost by many of the squad.

Spacey's own international playing career had begun in 1984. She was part of England's first World Cup squad in 1995, scoring in the opening match, in a team that also featured Hall Of Fame members Pauline Cope, Karen Walker, Gillian Coultard and Hope Powell. When Powell became manager, she brought the experienced Spacey back into the national side for the 1999 European Championships. Her quality and ability meant she was still able to influence the game from a deeper midfield role.