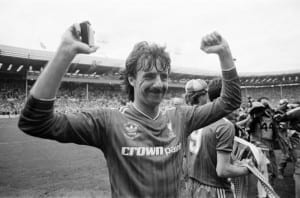 A stylish and accomplished defender, Mark Lawrenson was at the heart of Liverpool’s dominant side of the 1980s. After attracting attention at Preston North End, Brighton and Hove Albion initially outbid Liverpool to buy Lawrenson for £100,000 in 1977. He impressed with the Seagulls and after the club found itself in financial difficulties he was sold to Liverpool for £1 million. This made him Liverpool’s record signing and the most expensive defender in Britain.

At Liverpool Lawrenson formed a formidable partnership in central defence with Alan Hansen, creating the basis for Liverpool’s greatest period of domestic dominance. His trophy haul whilst at Liverpool included five League titles, one FA Cup, three League Cups and one European Cup. In total, between 1981 and 1988 Lawrenson played 356 times for Liverpool, scoring 18 goals: his versatility meaning he often appeared at full back or in midfield.  He also played 39 times for the Republic of Ireland.

Injuries curtailed Lawrenson's top-flight career, bowing out a league champion with Liverpool in 1988. He is now widely known for his post-playing career as a pundit and analyst with BBC Sport, appearing as a regular on Match Of The Day and other programmes, but his place as a player in the Hall Of Fame is secured. Presenting the Hall Of Fame award to the man who eventually succeeded him in the side, Liverpool great Phil Thompson said "In football terms he was a genius...no wonder he took my place in the side."