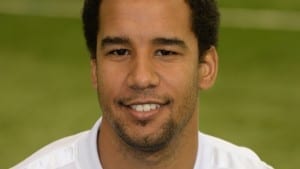 With 50 caps for England’s Cerebral Palsy team and having appeared at two Paralympic Games, Martin Sinclair takes great pride in his and his teammates’ achievements. "We want to be role models for young people – that’s what we want to bring as the Cerebral Palsy team.” Martin Sinclair is part of a footballing family. His father played semi-professionally, his brother Jake plays for Frome Town and younger brother Scott has played in the English and Scottish Premier Leagues. In 2012 Martin and Scott became the first brothers to represent Great Britain at the Paralympic and Olympic Games. But when it comes to international caps Martin has the edge on his brothers. "I lay my caps on the table I tell them 'I’m the England international,'" he said. "It’s just a bit of banter between brothers."

As a child appearing as an England international was not something that Sinclair imagined. Born with Cerebral Palsy, he enjoyed playing football until a freak injury at the age of 15 left him facing intense challenges. "I had the growth plate removed from my leg. I had Botox, traction and about eight operations. I was in a wheelchair for about four years. Then I had a Zimmer frame because I couldn’t use crutches." Sinclair overcame this setback and threw himself back into his football as soon as he could. Given a chance to join the coaching team at Plymouth Argyle by Ian Holloway, he was spotted by an England scout playing for the Pilgrims' pan-disability side. Whilst playing for England, Sinclair also worked as a teaching assistant with disabled school children. He is now an ambassador for The FA and Southampton FC's Saints Foundation.

Sinclair attributes much of his success to the way his parents treated him as a child. “I had such a positive outlook because my Mum and Dad never looked at my disability as a negative. My Mum didn’t want to wrap me up in cotton wool.” Being inducted into the Hall of Fame “means everything to me and my family.”

Our Football For All inductee @MartinSinclair1, supported by the @FA, sums up his England career: "Dreams do come true". #NFMHallOfFame pic.twitter.com/Z6aDDOnP7A

National Football Museum Hall Of Fame, Football For All awards are supported by The FA.