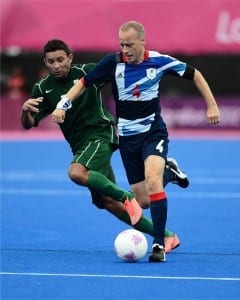 Matt Dimbylow's path to the Paralympic Games was no ordinary one.

As a bright young prospect, he played for the English Universities in the early 1990s, before embarking on a successful semi-professional career with clubs including Kidderminster Harriers and Bromsgrove.

Everything changed for Dimbylow when he suffered a head injury in a 2003 match. He was later diagnosed with extra pyramidal syndrome, a condition with similar symptoms to Parkinson's disease which affects the parts of the brain that control movement and speech. Dimbylow recalls that, "I was told that I probably had 10 quality years of life left…I learned who my friends were. But at last the thing had a name and a treatment. I kicked into action."

As Dimbylow came to terms with the condition, he learned that he may have the chance to take part in the 2008 Beijing Paralympic Games. He tried out for the seven-a-side team, for athletes with impairments commonly associated with cerebral palsy. Dimbylow went on to represent Great Britain in Beijing, and took part in the London 2012 games four years later. He was also part of the British team that took medals at successive Paralympic World Cups – bronze in 2010 and silver in 2012. Dimbylow has also captained the England cerebral palsy team. 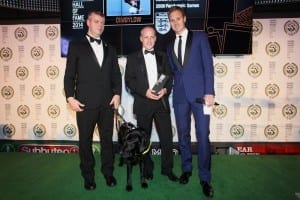 Matt Dimbylow was chosen by The FA to be inducted to the National Football Museum Hall Of Fame 'Football For All' category in 2014. Matt received his award from fellow Hall Of Fame member David Clarke, at a ceremony which also saw Michael Owen, Alan Shearer and Patrick Vieira amongst the inductees.