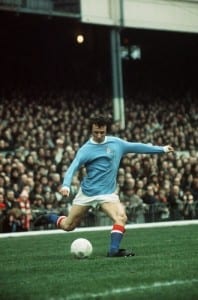 Mike Summerbee made his debut for Swindon Town in 1959, aged just 16. By the time Joe Mercer’s brought him to Manchester City in for £35,000 in 1965, the 22 year-old had more than 200 league appearances under his belt. He was to spend a decade at the heart of the stylish, attacking City side that was seen as the greatest in the club’s history.

As an incisive, goal-scoring right winger, he was a key component in the team that won four trophies between 1968 and 1970, alongside team mates Colin Bell and Francis Lee. In the deciding League fixture in 1968, Summerbee scored one of City’s goals in the thrilling 4-3 win over Newcastle that clinched the Championship. In the 1969 FA Cup Final, Summerbee’s run down the wing and cross set up Neil Young’s goal; the only one of the game. 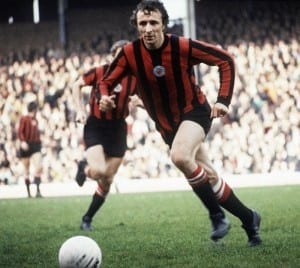 There was also a fair share of controversial incidents on the pitch, with a special ability, according to Francis Lee, to “retaliate first”.

Summerbee is one of the most popular Manchester City players of all time. Known for his humour, his high-living friendship and business partnership with George Best attracted plenty of headlines, and he even landed a speaking part in the cult film “Escape to Victory” alongside Sylvester Stallone and Michael Caine.

Joe Mercer best summed up his value to the team:

“The bravest player with his back to the game I have ever seen. When he is buzzing he takes them all apart.”