Bolton Wanderers Beat Manchester United at Wembley: Bolton players chair their Captain and hero Nat Lofthouse with the cup, at the end of the match. May 1958. Pic courtesy of Mirrorpix.

Known as the 'Lion of Vienna,’ Nat Lofthouse was the epitome of the down-to-earth football star of the 1940s and 1950s. A one-club man, he played over 400 games for Bolton Wanderers and earned 33 caps for England (as well as his famous nickname).

The title came from a prestigious match against Austria in 1952. Drawing 2-2 and with the Austrians pressing for a famous win, an England counter-attack saw Lofthouse put through on goal. He slid the ball past the keeper but was knocked cold in the challenge as he did. As he regretted later, ‘I never saw the ball enter the Austrian net for the goal of my life.’

Bolton born and bred, Lofthouse was signed by Bolton Wanderers as a 14 year old apprentice in 1939. He made his debut in wartime football and in 1943 he became a Bevin boy, one of 48,000 men who were sent to work in the coal mines rather than the armed services in World War II. A typical Saturday for Lofthouse involved getting up at 3.30am, catching the 4.30am tram to work, and working down the pit for 8 hours before the team bus took him to the match.

Having served his apprenticeship in wartime football, Lofthouse went on to become a star of peacetime football. The 285 goals he scored between 1946 and 1961 still make him Bolton’s top goalscorer. For England he scored a phenomenal 30 goals in 33 games. A forceful player, he combined physical strength with a powerful shot in either foot or a strong header.

His strength and power were again prominent when he won the single honour of his career. He scored both goals in the 1958 FA Cup Final, the second seeing him charge both keeper and ball over the line. This win made for up defeat in the 1953 FA Cup Final, the same year he was selected as the Footballer of the Year by the FWA. 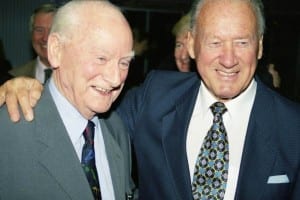 Sir Tom Finney and Nat Lofthouse together at the National Football Museum Hall Of Fame awards in 2002. Both men were among the inaugural inductees to the Hall Of Fame.

Lofthouse was one of the inaugural inductees to the National Football Museum Hall Of Fame in 2002, attending the event to collect his award alongside other greats of the game, including his friend and former England team-mate Sir Tom Finney.