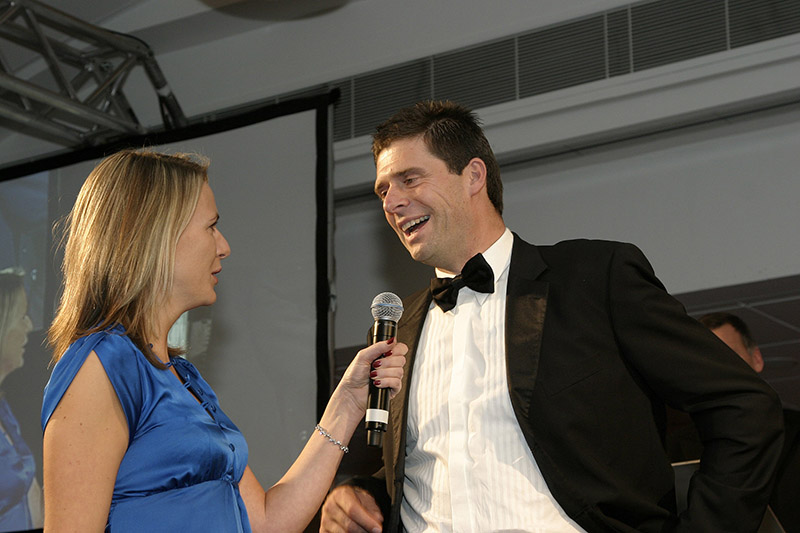 Niall Quinn on his induction into the Hall of Fame in 2007.

A totemic presence for club and country, Irish forward Niall Quinn was a dedicated servant to the game on and off the pitch. His charitable activities and committed patronage of good causes earned him a place in the Hall of Fame as our inaugural Football Foundation Community Champion.

Hailing from Dublin, Ireland, Niall Quinn brought a characteristically Gaelic sense of athleticism and resilience to the game across the water. Coming in at gft 5in, the striker would go on to earn ninety-two caps and score twenty-one goals for the Republic of Ireland. To this day, he remains one of the top scorers of all time for the Republic, second only to Robbie Keane. In addition, he made a significant impact on the English teams who nourished and developed his natural talents.

Quinn was born on 6th October 1966. Growing up in Perrystown, Dublin, his family were devoted to the Gaelic Athletics Association (GAA). Consequentially, from an extraordinarily young age, Quinn was building successful paths in sports such as Hurling and Gaelic football. When he was six years old, however, the ban on members playing or promoting “foreign games” such as rugby and “soccer” was lifted. After much consideration, his father eventually allowed him to pursue football. He made his name in the sport by goalkeeping for various youth teams in the Street Leagues, before being moved outfield, marking the beginning of one of the greatest strikers Ireland has produced.

In 1983, Arsenal knocked on Quinn’s door, asking him to make the big move to England. The teenage striker knew that Highbury had been home to many successful Dubliners and, seeing an opportunity to join this list, he was signed not long after his seventeenth birthday. His first season was a success, with Quinn enjoying a goalscoring debut against Liverpool in December 1985 and making a further twelve appearances. When George Graham took over in 1986/87, Quinn was made a regular forward, scoring eight goals in 35 games. The team finished fourth in the First Division that year. Though he struggled to maintain this momentum in the subsequent two seasons, he started the 1987 League Cup Final win against Liverpool and earned 13 caps for Ireland during his time at Highbury. 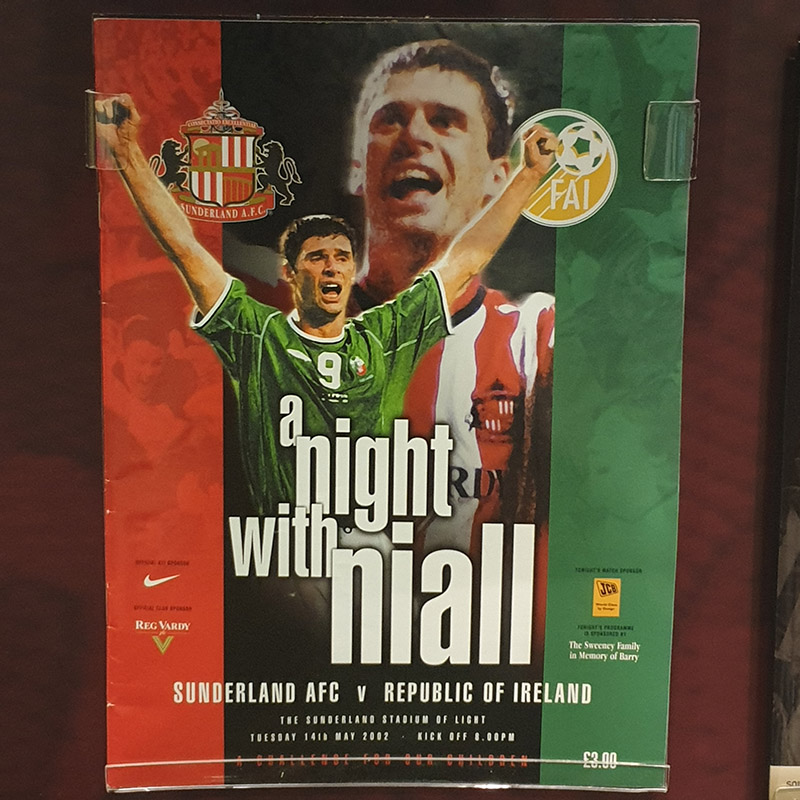 A programme from Niall Quinn's testimonial, on display in the Match Gallery.

In his own words, despite these achievements, Quinn began to feel rather like a “hostage” at Arsenal and very nearly quit the game altogether. In March 1990, however, Quinn left Highbury to join Manchester City for £700,000 under manager Howard Kendall. It was here that Quinn would hit his stride, becoming a regular in his second season. Over the course of his career at Maine Road, Quinn started in 183 games and scored 66 goals, four times as many as he did in seven years with Arsenal. In one of his most famous moments, Quinn put his early training to use when he replaced goalkeeper Tony Coton, who was sent off on 20th April 1991 against Derby County. Quinn would go on to save a penalty, allowing City to come out on top 2-1 and relegating the Rams in the process.

Quinn would subsequentially spend the last seven six seasons of his playing career at Sunderland, where he was transferred for a club record of £1.3 million. During his time with the Black Cats, he would prove himself equally as valuable as at his previous post, making 168appearances and scoring 61 goals. What’s more, it is commonly believed that the striking abilities of Quinn and his teammate Kevin Phillips were instrumental in securing Sunderland’s placement in the Premier League ahead of the 1999-2000 season. Speaking on Niall’s success up north, former Ireland manager Jack Charlton remarked in 2013 that the club were “still trying to replace him”. Even after his nineteen years of professional football, Quinn would go on to do further work for Sunderland, briefly as a manager and for several years as chairman.

Quinn’s accomplishments have reached far beyond the realm of football, however, and he is widely regarded to be a charitable and generous individual. In 2002, he held a testimonial match between Sunderland and Republic of Ireland, which went on to raise over £1 million for charity. These efforts led to him being awarded MBE in 2003 for outstanding services to international football and his contributions to UK charities. Quinn is also a Patron of the Glass Slipper Appeal, raising money for hospitals in Sunderland in their fight against cancer and is closely associated with Our Lady’s Hospital for Sick Children in Crumlin, Dublin. Of his work, then Prime Minister Tony Blair noted it was “absolutely typical of the individual. In circumstances where people in sport often get a lot of bad publicity, this is an example we can hold up to everybody”.