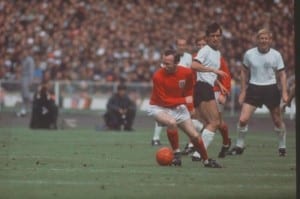 Norbert Peter Stiles, known to all as Nobby, is the Collyhurst-born midfielder who became one of the most iconic figures of England's 1966 World Cup victory.

Stiles dancing on the pitch with the Jules Rimet trophy above his head; socks round his ankles, false teeth taken out, remains a fond image for many Three Lions fans. But the England story could have been much different for the Manchester United midfielder.

As Sir Alf Ramsey began his preparations for the World Cup, England were faced with a schedule of friendlies. Bobby Charlton was seen as a certainty for Ramsey's midfield, but who would play alongside him was still up for debate. Stiles' debut came against Scotland in April 1965. He was to become a regular in the side over the following run of friendlies and Home Championship games. He even wore the number 9 shirt (and scored his only England goal in the process) in a friendly against West Germany in February 1966; the side were criticised for a 1-0 win over opposition who were still perceived as weaker than the hosts. 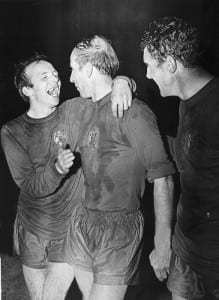 By this point, Stiles was firmly established in the Manchester United midfield. Having made his debut as a full back in 1960, United manager Matt Busby made the relatively rare choice to convert Stiles to a defensive, ball-winning midfielder. In an era of packed forward lines, Stiles' ability to win possession and feed colleagues such as Bobby Charlton was a key tactical variation for Busby. Stiles' United won championships in the season either side of the 1966 World Cup.

Having won his first cap just over a year earlier, Stiles was established as a key player for the World Cup. His tireless running and tackling alongside another young, energetic midfielder in Alan Ball gave licence to Ramsey's full backs to get forward and attacking talents to express themselves. The 'wingless wonders' were reliant on the midfield engine. So key was Stiles, that Ramsey put his own job on the line, in the middle of the tournament, to protect his midfielder from FA interference.

Stiles had made a poor challenge in the vital final group game against France: with his opponent floored, England took advantage and scored. A retrospective booking was awarded by FIFA, and the FA selection committee contacted Ramsey to tell him to drop Stiles for the next game: the United midfielder, already subject to criticism from some press for his perceived aggression in the ball-winning role, was to be made an example of. Ramsey stood his, and Stiles' ground. Threatening to resign immediately if he wasn't able to select Stiles in the next game, Ramsey made his point.

In an interview in 2002, Stiles claimed that faith was key to Ramsey's success: "It worked both ways. Because he was loyal to you, you'd run through brick walls for him." Stiles himself was a brick wall in the England midfield for the rest of the tournament: against an aggressive Argentina in the next round, Stiles kept his cool, and England built up a head of steam...

Two of Stiles' most iconic performances came against one of the era's greats: Eusebio. In the World Cup semi-final the Portugese great scored from the penalty spot, but it was a rare glimpse of goal for a world star otherwise shackled by the diminutive midfielder. Two years later, United faced off against Eusebio's great Benfica side in the European Cup final. Stiles again largely nullified the threat of arguably Europe's greatest attacker. United won 4-1. Just as two years earlier, Stiles had run tirelessly into extra-time of a major final, and come out victorious.

In the 1966 final, Stiles' performance for England matched that of Franz Beckenbauer for West Germany: stopping the opposition's main attackers, his desire to win was one of the key elements that kept England on course for victory.

By 1968's European Championships, Alan Mullery had replaced Stiles in Ramsey's plans for England. Winning 28 caps in total, Stiles was to be the least-capped of the 1966 side, but he remains one of the country's most fondly-remembered footballers.