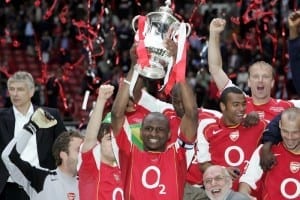 Formidable midfield general Patrick Vieira was the driving force in Arsenal’s hugely successful side of the mid-nineties and early noughties, leading the Gunners for almost a decade.

Senegalese by birth, Vieira moved to France at a young age, and was just seventeen when he made his debut with AS Cannes. Within two years, he was skippering the Ligue One outfit. Italian giants AC Milan took the fledgling prospect to Italy, but he was afforded little senior game time at San Siro, making just two league appearances for the Rossoneri.

Having finished without a trophy in 1995/96, Arsenal were undertaking a raft of changes on and off the pitch, and Vieira was brought to North London ahead of compatriot Arsene Wenger. Within months, the all-action midfielder had won over supporters at Highbury, bringing strength, variety and intelligence to the Arsenal ranks.

The following year, Vieira was joined in the middle of the park by fellow Frenchman Emmanuel Petit, forming a partnership which yielded a league and FA Cup double in 1998; the pair would later combine to score France’s third and final goal in the World Cup final against Brazil.

Patrick’s aggressive style brought with it a number of disciplinary issues, but the midfielder matured as his career progressed, developing into one of the team’s leaders on the pitch during a relatively fallow period – though he did taste further international success at the 2000 European Championship.

"ON HIS DAY, WHEN HE WAS DRIVING ARSENAL ON WITH THE SHEER FORCE OF HIS PERSONALITY, HE WAS UNPLAYABLE." ROY KEANE

His commitment to the Gunners’ cause was rewarded when Arsenal belatedly lifted further silverware in 2002, completing another superb Double. Already noted for his influence on games and on teammates, Patrick was the natural successor to the captaincy when Tony Adams retired.

Under his stewardship, Arsenal mounted a successful defence of the FA Cup in 2003, before going on to complete one of English football’s most astonishing feats. The Gunners went an entire Premier League season without suffering defeat – becoming the first English side in 115 years to do so. Despite struggling with a thigh injury for parts of the season, Vieira led by example as ‘The Invincibles’ romped to the title. 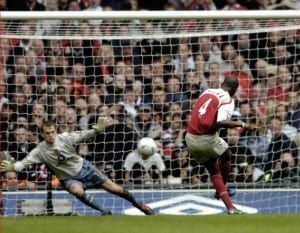 Patrick Vieira dispatches the winning spot-kick in the 2005 FA Cup final - his last appearance in an Arsenal shirt. Image via Mirrorpix.

The following season, Manchester United reclaimed their place at the top of the Premier League. One of the flashpoints of the season was Vieira’s tunnel confrontation with United counterpart Roy Keane prior to a 4-2 defeat at Highbury – an incident which encapsulated one of the Premier League’s greatest ever personal battles.

In what proved to be his final game in an Arsenal shirt, Vieira went face-to-face with Keane again in the 2005 FA Cup final, and scored the match-winning spot kick in the shootout to lift the FA Cup for a fourth time.

The Frenchman was often linked with moves to Spain and Italy throughout his Arsenal career, and ultimately joined Juventus in 2005, before spending a further four years at Inter Milan. Vieira ended his career back on these shores with Manchester City, coming on a substitute for the final moments of their FA Cup final triumph in 2011.

Having made over 400 appearances in the red and white jersey and lifted eleven trophies (including four Charity Shields), Patrick Vieira is considered to be one of the most influential midfielders to ever wear an Arsenal shirt – and one of the greatest players of the Premier League era.