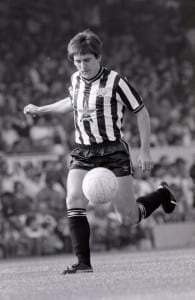 A unique talent in English football, Peter Beardsley’s career is a tale of contrasts and surprises that may never be equalled.

A diminutive number 10 with a thunderous shot and great skill on the ball, Beardsley was a deadly striker who claimed he played best in midfield. Released as a teenager by his hometown club of Newcastle, he would later spend two successful spells at St. James’ Park. His early career took him from Carlisle to Canada, via a brief spell at Old Trafford, and he ended his career in Australia. He won titles with Liverpool but was transferred to Everton, and scored derby winners for both Merseyside clubs. Later in his career he played for Manchester City, making him the only man to appear for all four Liverpool and Manchester teams. He was even inducted to the National Football Museum Hall Of Fame twice; in 2007 for his achievements on the pitch and in the ‘Community Champion’ category two years later for his generosity off the pitch.

Beardsley’s career appeared to span different footballing eras: he was signed by Ron Atkinson at Manchester United, played alongside Kevin Keegan at Newcastle, won Division One titles for Kenny Dalglish and played under his old teammate Keegan as Newcastle challenged Sir Alex Ferguson’s Manchester United for the Premier League title in 1996. Sold for a British transfer record fee of £1.9 million in 1987, sellers Newcastle brought him back for £1.5 million in 1993; by 1996 he was supplying £15 million man Alan Shearer from midfield. 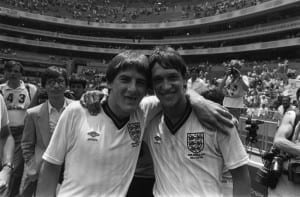 World Cup 1986 England 3 Paraguay 0 Last 16
A toothless Peter Beardsley and Gary Lineker after the final whistle, in a game which saw them each grab a goal. Pic courtesy of Mirrorpix.

It was Beardsley’s years at Anfield that saw him win the only silverware of his career. Playing alongside John Aldridge, and later Ian Rush, as well as John Barnes, Beardsley was the creative force in a dynamic attack which won two Division One titles and an FA Cup.

In all this it would be easy to forget his performances for England, where over the course of 59 caps he was the perfect foil for the goalscoring attributes of Gary Lineker. Given his debut by Bobby Robson in the build-up to the 1986 World Cup (scoring in the 3-0 win over Paraguay at that tournament), Beardsley was out of favour during the disappointing Graham Taylor era, but was recalled by Terry Venables ahead of Euro 96. At the time, Venables wrote “With that one decision, our football became more fluid and attractive.”

In a piece recorded exclusively for the National Football Museum, Gary Lineker singled Beardsley out for praise when discussing his favourite strike partners, describing him as “unselfish and creative; we knew each other’s games perfectly.”

Throughout his career, Beardsley’s love for playing the game shone through. Seemingly happier when making goals than when scoring himself, Beardsley’s energy, creativity and gift for keeping opposition defenders guessing meant he was a fan favourite wherever he went. In the later stages of his career he played for Bolton Wanderers, Manchester City, Fulham and finally in Division Three for Hartlepool, helping the North East side stay in the Football League.

His final move saw the Wallsend Boys’ Club graduate playing for Melbourne Knights in the Australian league. A 20 year career saw Beardsley travel the globe, span cities and become a hometown hero; lifting trophies and fighting relegation with the same blend of skill, determination and creativity.