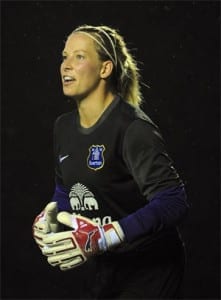 Rachel Brown-Finnis is one of English football’s most recognisable female players, having enjoyed a twenty year career at both Merseyside clubs and in the USA.

Having first discovered football in her native Lancashire, Brown-Finnis joined Accrington Ladies at the age of 12.  By the time she was 15, Brown-Finnis had signed for Liverpool Ladies, making her debut on the opening day of the 1995-96 season.  That season culminated in a first FA Cup final appearance and a runner-up medal as the Reds were beaten by Croydon on penalties.

In 1998, Brown-Finnis moved to the USA, initially playing for Alabama Crimson Tide, before transferring to the University of Pittsburgh Panthers, where she achieved the club record for fewest goals conceded in a season.

Brown-Finnis joined Everton in 2003, spending the next decade with the Toffees.  Her finest moment came in the 2010 FA Cup final as she collected her first winner’s medal following an extra time win over Arsenal.

Matching her youthful club debut, Brown-Finnis made her first appearance for England aged just 16, going on to win 82 caps, appearing at the 2005 European Championships and 2007 World Cup.

Brown-Finnis was also a member of GB’s 2012 London Olympic squad, a selection which she cited as the pinnacle of her career.