A reliable, tough-tackling left back, Rachel Unitt has won over 100 caps for the Lionesses of England.

She started her football career with Wolves aged 14, but made her name with Fulham and Everton Ladies.

One of the first England players to gain a central contract in 2009, Unitt has represented England at three European Championships and two World Cups: injuries prevented at least two other major tournament appearances.

The FA's International Player of The Year in 2004 and 2006, Unitt became one of the women's games most recognisable players as the success and popularity of the England side grew during the 2000s. Winning her 100th cap in 2012, Unitt captained the Lionesses to a 6-0 victory in a Euro 2013 qualifier, marking the appearance by scoring a rare headed goal. 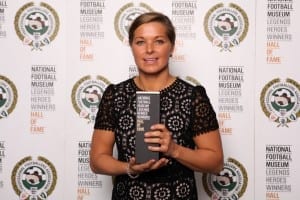 In club football, Unitt won a domestic treble with Fulham in 2003 and the Women’s FA Cup with Everton in 2010. During this time she played briefly in the American W league for New Jersey Wildcats. After 8 seasons with Everton Ladies she moved on to Birmingham in 2012, followed by Notts County in 2014.