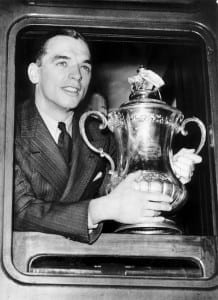 Sunderland captain Raich Carter with the FA Cup trophy on his way back to Sunderland by train after his team had beaten Preston in the 1937 FA Cup Final
May 1937. Pic courtesy of Mirrorpix

Horatio 'Raich' Stratton Carter, aged just 23, captained his home town team Sunderland to a League Championship in 1936. The following year he led the team to FA Cup final victory against Preston North End, scoring the second in a 3-1 win.

A skilful inside forward, confident of his own abilities and demanding of others, England team-mate Stanley Matthews summed him up best: “Bewilderingly clever, constructive, lethal in front of goal, yet unselfish.”

Like other players of this era his career was heavily disrupted by the outbreak of World War II. Carter joined the RAF and, stationed at Loughborough, made guest appearances for Derby County in war-time fixtures. After the war, he signed for Derby in 1946, apparently declaring "Sunderland were silly to sell me and Derby were lucky to have me" after an £8000 transfer. Carter duly inspired his new side to FA Cup victory in his first season (becoming the only player to lift the trophy  on both sides of the war) and even found time to play county cricket for Derbyshire. He finished his playing career as player-manager for Hull City, leading the team to the Third Division (North) championship in 1949.

In a career shorn of five years of football during the war, Carter had notched 216 goals in 451 appearances for his three clubs. As a manager he enjoyed promotions with Hull and, in 1956, with Leeds, where he managed the great talent of John Charles. Having left Leeds after the sale of Charles, Carter led Mansfield Town from the Fourth Division in 1963, before taking his final job in management at Middlesborough.