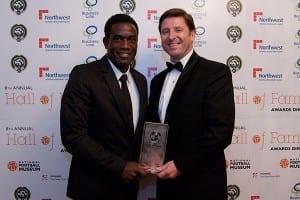 Wimbledon captain Robbie Earle was a committed performer on the pitch, and has shown a similar level of dedication towards developing the game off the field.

Having enjoyed a long professional career in the game, Jamaica international Earle has devoted much of his time and energy to charitable causes both in the UK and abroad. From assisting children with reading and writing skills to developing coaching networks internationally, Robbie’s work has extended across three different continents, making him a worthy recipient of a Football Foundation Community Champion award.

Though he started out as a junior at Stoke City, Robbie made his breakthrough as part of John McGrath’s Port Vale outfit. He truly flourished for the Valiants under John Rudge from 1984 onwards, starting every league game over the next two years. A frequent name on the scoresheet for the Vale, the attacking midfielder played a major role in their promotion campaigns of 1986 and 1989, hitting double figures in five of his seasons at Vale Park.

Wimbledon acquired Earle’s services in the summer of 1991, and he soon displayed all of the qualities at Selhurst Park that had made him such a popular figure at the Vale in previous years. A leader by example, Earle captained the “Crazy Gang” to League Cup and FA Cup semi-finals, and became widely known for his all-action performances in the middle of the park.

His spell at Wimbledon also brought with it international recognition in 1998. Though born in Newcastle-under-Lyme, Robbie qualified to represent Jamaica through his ancestral heritage, and went on to play for the Reggae Boyz in France. Earle himself nodded home Jamaica’s first ever World Cup goal in their opening game against Croatia, though his side would go on to lose 3-1 on the day.

Having scored 90 goals for Port Vale and a further 76 for Wimbledon, Robbie Earle was forced to retire in 2000 after suffering a ruptured pancreas during a reserve team game. By that point, Earle had firmly established himself as a fan favourite at both clubs, his high strike rate and do-or-die attitude endearing him to Valiants and Dons alike.

Throughout his career, Robbie Earle was a passionate supporter of grassroots football, and remained typically committed to the cause long after hanging up his boots. On these shores, Earle has served as an ambassador for the Football Foundation and Show Racism the Red Card, as well as lending his support to Reading the Game, a National Literacy Trust initiative focused on the development of reading and writing skills.

His charity work has also taken him further field into Africa and Asia. Working with the Premier League’s Premier Skills initiative as Head Coach, Earle helped to improve the standards of the sport in these developing areas, as well as fostering a greater understanding of the English language where appropriate.

In recognition of his endeavours on a national and global scale, Robbie Earle was inducted into the National Football Museum Hall of Fame in 2009 as a Football Foundation Community Champion.