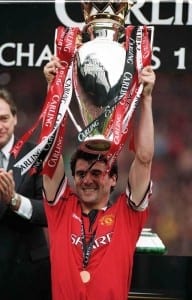 Roy Keane Manchester United Captain May 1999
holding the Premiership Trophy to the Fans at Old Trafford after winning the League Title 1999 the final score was 2-1 with Arsenal as runner up. Pic via Mirrorpix.

Roy Keane is the fiery Irishman who became Manchester United's midfield general during the most successful period of Sir Alex Ferguson's managerial reign. Known for his hard work, hard tackling and passionate displays, during his 12 years at Old Trafford he made the midfield his own. Perhaps best defined by his performances in the treble-winning season of 1998/99, 'Keano's career was filled with outstanding performances, much silverware and the occasional outburst…

Initially rejected by scouts as a teenager who deemed him 'too small', Keane began his career in Ireland at the relatively unknown Cobh Ramblers, but in 1990 was snapped up by Brian Clough at Nottingham Forest. It didn’t take him too long to make an impact, making his debut for Forest at Liverpool and being named Barclays Young Eagle of the Month for December.

Despite reportedly being on the receiving end of a punch from his manager after a costly error in an FA Cup tie, Keane remained thankful for the chances Clough gave him. However despite a number of eye-catching performances for a competitive Forest side, he failed to win anything at the club; Forest were defeated in League and FA Cup finals during his time there.  The team were relegated at the end of the first Premier League season in 1993, activating a release clause in Keane’s contract. The Irishman made the move to Manchester United for a then British record fee of £3.75 million.

“It was the most emphatic display of selflessness I have seen on a football field. I felt such an honour to be associated with such a player." 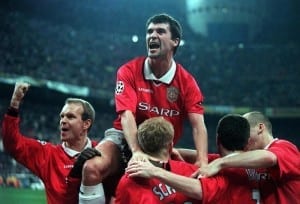 Keane’s performance in the 1999 Champions League semi-final against Juventus epitomises the player.  The team were 2 goals down and the Irishman led the charge to recovery, scoring the first goal in an eventual 3-2 victory to United.  He undoubtedly inspired his team to success with his ‘never say die’ attitude, despite picking up a booking that would see him suspended for the Champions League final. Without him, United completed their historic 'treble'. Only goalkeeper Peter Schmeichel made more appearances for the team than Keane during the season.

Keane was already used to success: in his first season United completed their first League and FA Cup double; a feat repeated in 1995-96. Keane's attitude however meant he was always looking at the next victory, rather than celebrating the last one. Some outspoken criticism of his United team-mates, as Keane's own on-pitch abilities began to be impaired by a series of injuries, led to his sudden departure in 2005. He ended his career with 1 Champions League, 7 Premier League titles and 4 FA Cups. He won the Community Shield four times and the Intercontinental Cup once. He was voted Footballer of the Year and Players' Player of the Year in 2000. Keane went on to play 10 games for Celtic and won the Scottish Premier League and the Scottish League Cup. 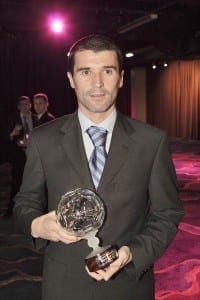 His career has also been somewhat overshadowed by memorable lows. The lowest perhaps being his tackle on Norwegian player Alfe-Inge Håland.  He admitted in his autobiography that the tackle was an act of revenge following a past incident. There was also the infamous ‘Prawn Sandwich Affair’ during which Keane bemoaned what he perceived to be the poor atmosphere in the club's Champions League clash with Dynamo Kiev. Keane had high standards which he expected all to match.

He worked under the guidance of Alex Ferguson, and perhaps more than any other player he symbolised his manager’s aggression and desire to win. At a time when ‘celebrity’ was increasingly synonymous with footballers, Keane remained a footballer through and through. His career was surrounded by uncertainty but you always knew one thing; he would give his all for the team he was representing.